NPP elections : Focus on issues, policy based campaign devoid of undermining each other – Afenyo-Markin to contestants 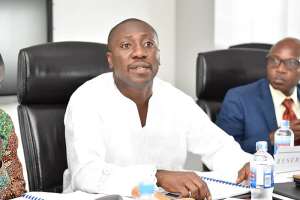 The Deputy Majority Leader, Alexander Kwamena Afenyo-Markin, has charged party members who have expressed willingness to contest in the various positions of the ruling New Patriotic Party to avoid undermining one another.

He said such action has the potential to negatively affect the party’s fortunes in the 2024 general elections.

‘’This is why it seems unhealthy and irritatingly too early, to a large extent, perilous, for those of our compatriots interested in leading our party at various levels, the polling station, constituency, regional and national levels to start aggressively undermining each other as some reports suggest,’’ he stated.

The Effutu lawmaker indicated that if such worrying phenomenon is not nipped in the bud, the agenda to break the eight years electoral cycle maybe a mirage.

The Deputy Majority Leader made these remarks when he addressed his colleagues at the ongoing Workshop for Majority Caucus at Kwahu Abetifi which seeks to enhance their advocacies on some key policies and programmes of the government.

‘’If we are not careful, we will end up working at cross purposes which will lead us to a distorted common agenda of breaking the eight, the people of Ghana have reposed in us much confidence to do more, and we must stay focused and deliver just that."

According to Hon Afenyo-Markin, there was the need for all of us to learn from past mistakes, saying "we solidify our grassroot, work together to break the eight."

He stressed that when the Majority Caucus are determined to work together and support one another, success would crown their efforts.

"The criticality of this period requires that members of the Majority caucus should eschew all acts which do not conform to the doctrines of the elephant family, "we are the faces of the party in our respective constituencies and as such our actions must one that inspires," he observed.

The Deputy Majority Leader further noted that it was in their own interest that they do not allow petty issues to undermine the ultimate goal of the party in its resolve to win the 2024 elections.

He opined that the unprecedented transformational, social intervention programmes and policies the NPP has done in just five years of governance will translate into massive votes come 2024.

He further called for more of such capacity building for members periodically to aid them in their advocacies on the floor Parliament.