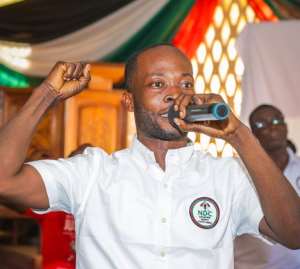 The New Patriotic Party (NPP) government led by President Akufo-Addo has been described as poor managers of Ghana's educational sector since independence.

Ahmed Agbenyadzi, Deputy Youth organiser of the main opposition National Democratic Congress (NDC) for Akwapim North, has expressed worry at the way the sector is being managed by the former and current ministers of education.

In an interview on Koforidua based Bryt FM on Saturday on the brouhaha surrounding the trimester and semester calendar, Mr. Agbenyadzi indicated that the NPP government has woefully failed in most decisions taken in the educational sector.

The Ministry of Education has reversed to the trimester calendar few days after approving of a semester for all basic schools across the country.

The move was to see pupils going to school for twenty weeks before going on vacation as compared to the past twelve to fifteen weeks in the trimester calendar.

But Ahmed Agbenyadzi speaking to Kwabena Nyarko Abronoma said the back-and-forth policies of the government have adversely affected the country's educational sector since 2017.

He complained about poor implementation of the free SHS policy, introduction of new curriculum as well as improving the wellbeing of teachers which comes with many challenges that could have been prevented.

"You see my brother, President Akufo-Addo and the NPP has failed in all the policies and initiatives in the educational sector. They rushed to introduce the free SHS policy, and the result is there for all of us to see. Students don't even know when to resume school as compared to those days when students are told when to report back to school after break" he stated.

Mr. Agbenyadzi however, urged Ghanaians to have hope in the NDC and bring it back into power come 2024 to redeem the country's falling educational standard.