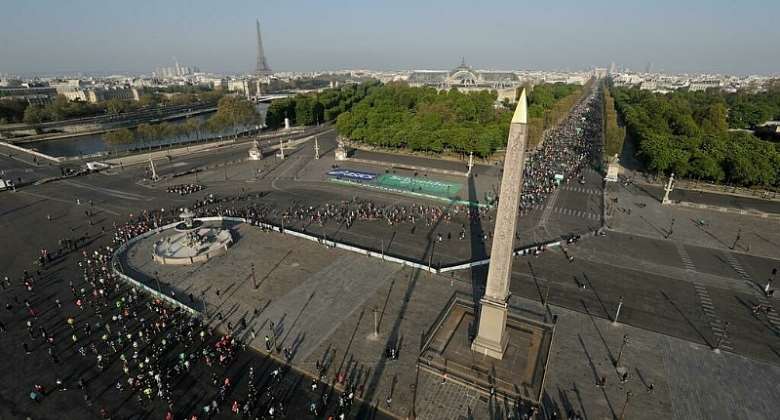 The Luxor obelisk, at the centre of the Place de la Concorde in Paris, is being restored to its former glory. Erected in 1836, the city's oldest monument was a gift from an Egyptian king. The makeover coincides with the bicentenary of the translation of the Rosetta Stone by Frenchman Jean-François Champollion.

Weighing 222 tons, capped with a golden pyramid that was added in 1988, the edifice is to be thoroughly cleaned to get rid of the pollution that has built up over the years and which now covers the Egyptian symbols carved into the stone, the French Culture Minister, Roselyne Bachelot, said during a visit to the work site.

During the restoration, the obelisk will be protected by a cover decorated with artwork designed by Jonathan Sobel, a former student of the Beaux-Arts school in Paris.

Dozens of professionals and technicians have been recruited to restore the monument, under the direction of the special research laboratory dedicated to historical monuments (LRMH).

It will cost one million euros to clean and renovate, 86 percent of the total financed by the German Kärcher company, which has already restored the statue of Liberty in New York and the statue of Christ the Redeemer above the Brazilian city Rio de Janeiro.

Since November, scaffolding has been erected to enable the cleaning, shrouding the pink Assouan granite column until at least the end of May.

Offered to King Charles X at the time, it was a gesture of friendship and gratitude for the deciphering of the Rosetta Stone by Jean-François Champollion in 1822. Champollion's work enabled the first accurate translations of Egyptian hieroglyphs.

Originally, the pair of obelisks were placed at the entrance of the Luxor Temple in Thebes, Egypt, built under the reign of the Pharaon Ramses II.

It took six years for the first obelisk to be transported to Paris. The attempt to bring the second one was later abandoned.

Shipped on a boat especially designed in Toulon, the column was used to replace a monument to Louis XVI, who died on the guillotine at Place de la Concorde during the French Revolution.

The obelisk was finally erected in central Paris on 25 October 1836.

Carved into the four sides of the monument, hieroglyphs describe Ramsès II's veneration of the gods. At the top was an offering of wine (or water) to Amon, god of Thebes. The name of the pharaoh is repeated 40 times.

The anniversary will also be marked by several exhibitions and conferences in France and Europe, Le Louvre (in Paris and Lens), the National Library (BNF), the Champollion museum in Figeac, the Mucem in Marseille and the Beaux-Arts in Lyon.