Bogoso Explosion: 'Driver got down and was telling people to run away' — MCE 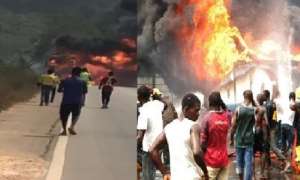 The Municipal Chief Executive (MCE) for Prestea-Huni Valley, Dr Isaac Dasmani, has bemoaned how some of the victims of the deadly explosion at Abiate, a suburb of Bogoso in the Western Region, lost their lives after failing to heed to warnings from the truck driver who is at the centre of the explosion.

He told Media General‘s Eric Yaw Adjei in an interview that after his truck hit a motorbike, the driver shouted at residents to run for their lives.

“So, the driver got down and was telling people to run away and, you know, some people were also trying to find out what was happening,” Dr Dasmani narrated.

“While the driver was shouting that people should run away, so I think it happened and in about 10 minutes time the whole thing exploded.”