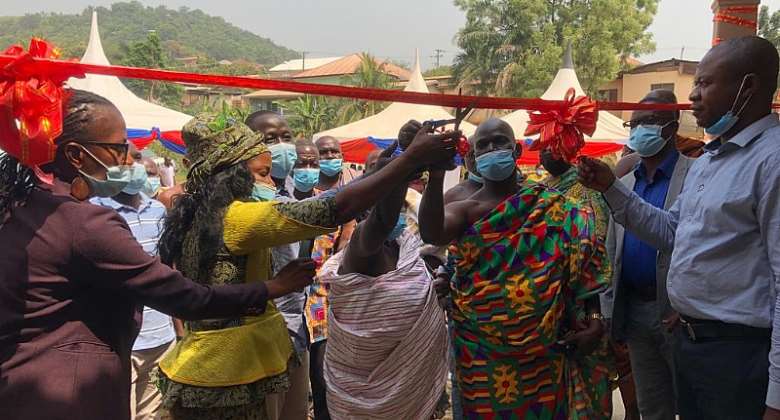 School children in Domeabra and Bossman can now heave a sigh of relief since they will not make long journeys to nearby communities to access Kindergarten education.

This was after the Assembly led by the DCE of Obuasi East Honorable Faustina Amissah and the Member of Parliament for the area Dr. Patrick Boakye Yiadom handed over a KG block each to both communities.

At separate ceremonies to commission the projects, the DCE said access to education has become the priority of the Assembly and she will work assiduously to elevate the standard of teaching and learning in the district.

She assured that the Assembly is committed to building more school structures to deal with the shift system in selected schools within the District. She said, " Though the Assembly has built more schools in the District, we will continue to commit more resources into building school structures in areas with no schools and also deal with congestion in some schools here".

Whiles appealing to parents to cooperate and support teachers, the DCE also advised teachers to be committed and devoted to their work.

Funded through DPAT, the new building provides relief and serene atmosphere for teaching and learning for over 300 pupils who prior to the Assembly’s intervention did not have access to kindergarten in their communities.

The Member of Parliament for Obuasi East Dr. Patrick Boakye Yiadom seized the opportunity to educate the people on Electronic Transaction Levy (commonly known as Electronic Levy or E-levy).

He said the E- levy which was proposed by the Minister of Finance, Ken Ofori Atta on 17 November 2021, will help government to finance the plethora of developmental projects it is currently undertaking and those it has lined up to do.

The Assemblymember for the Bossman- Low-cost Electoralarea, Daniel Obeng revealed that he was excited about the pace of response by the Assembly in providing them with the KG block, which according to him will go a long way to support children in the area to have Kindergarten Education before advancing to the primary level.

Prepare for hunger in Ghana — GAWU warn Ghanaians
58 minutes ago