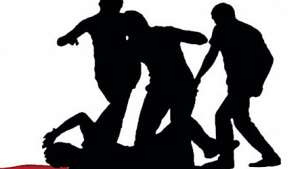 A suspected thief who allegedly invaded the Akro Secondary Technical School has been beaten to death by students of the school.

Another suspect who survived the physical assault is currently in critical condition at the St. Martins De Poress Hospital.

The two were arrested and physically assaulted until they became unconscious.

The two, whose names were given as Sackitey Emmanuel Kpabitey and Odoi Solomon, were subsequently sent to the hospital by five police officers who visited the school after receiving information about the invasion from the school’s headmaster.

However, Sackitey Emmanuel could not survive and was pronounced dead on arrival by hospital authorities.

The remains of the deceased have been deposited at the hospital mortuary for autopsy.

Narrating the incident, the District Commander of Odumase, Supt. Doris Grant said: “I had information that some two boys had invaded the school, and they were thieves. My men responded and came here and saw that they had been physically assaulted. I gave directives that they should be taken to the hospital. Unfortunately, one died.”