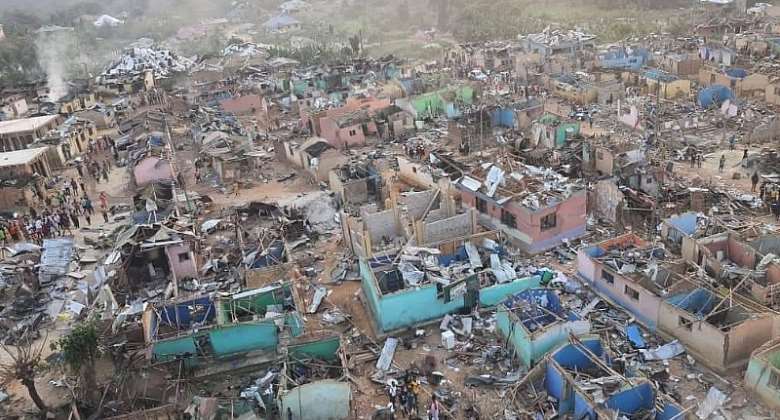 It has happened again.

People were going about their business at Apiate, a village near Bogoso, in the Western Region, on January 20, 2022.

All of a sudden, all they heard was a very loud BANG!…BOOM!

To some of them, that was the last noise they were ever to hear on Planet Earth.

To others, the noise was followed by excruciating pain.

Others had lacerations on all parts of their bodies.

Clothing was torn off the bodies of many. Iron sheets and woodwork tumbled down, burying bodies beneath them. A road “broke” in half – as if it had been bombed from the air by a jet fighter.

Buildings everywhere in the village collapsed like Lego structures. News footage of the destruction captured the wails of one person who must have been standing near whoever shot the film: “Ei!…Ei!…Ei!…Ei!”

Yes, the person was so stupefied that only a single-word vocabulary emanated from his vocal chords. Ei!…Ei!…Ei!

How often will Ghanaians condemn themselves to uttering such lamentations?

For without prejudice to any “investigations” that are being carried out, the facts known so far point clearly to a word which seldom occurs in our discourse but which we cannot avoid – neglect!

Our scientists and lawyers have put their heads together and written Regulations that oblige persons transporting explosives to observe certain safety measures that should have made the accident at Apiate simply impossible, repeat impossible.

Regulations such as: “A person who transports explosives … shall give notice to the Chief Inspector of Mines about the type and amount of explosives to be transported at least forty-eight hours before the explosives are transported.”

Was this done? The investigators should tell us that as quickly as possible. For we don’t want to be mystified into lamenting ceaselessly, as if Fate is trying to punish us (as numerous false prophets are no doubt proclaiming already!)

Other Regulations specify that:

A person who drives a vehicle that carries explosives shall not carry explosives in the driver’s cab of that vehicle;

A person who drives a vehicle in which explosives are transported shall keep the interior of the explosives compartment clean and in good order.

A person who uses a vehicle to transport explosives shall ensure that the vehicle is authorised and (a) is of sound construction and free from any patent defect, and is maintained in good working order;

(b) is propelled by a diesel engine;

(c) is provided with two fire extinguishers mounted on a suitable holder that are readily available for use and which are kept in good working order at all times;…

(j) the exhaust pipe of the vehicle is fitted and directed in a manner that ensures that neither the pipe nor the exhaust gases pass under any part of the compartment used for carrying the explosives;

except where the vehicle is empty, [it must have] at each corner, so as to be distinctly visible from the front and rear, a red flag at least four hundred and fifty millimetres square, with the letter “E” in black superimposed in the middle; the vehicle is loaded with explosives, [shall be] posted on the two sides and on the front and the rear in red paint on a white background and in a manner that enables it to be distinctly visible from the front, rear and sides, a sign that bears the words:”DANGER-EXPLOSIVES”;

4. A person who drives a vehicle that is transporting explosives shall not drive faster than sixty kilometres per hour.

A person who transports explosives in a motor vehicle, shall transport the explosives between 6.00 am and 6.00 pm.

(2) Without limiting sub-regulation (1), a person who transports explosives in a road vehicle shall ensure that the transportation is done under a police escort.

[A vehicle carrying explosives can only park in a] town or village at a location off a public road and at a reasonable and safe distance from an inhabited building, if the vehicle is kept in charge of a blastman and is accompanied by a police escort, both of whom stay with the vehicle throughout the period the vehicle is parked.

Preliminary reports say that the vehicle carrying the explosives was in collision with a motor-cycle or an adapted motor-cycle and that the driver got out of the vehicle to warn people nearby to leave their homes and work-places because he feared it would catch fire and cause a deadly blast. If he did this, he deserves praise.

The question is: if the vehicle had a police escort – as required by the Regulations – how could a motorbike come so close to the vehicle as to collide with it?

The answers to these questions must, I repeat, be given to the public. For we all know how corrupt many systems in Ghana are, and it is patent that those who neglected to conform with the Regulations would do everything to cover up their neglect.

Without anyone caring enough for the public safety as to expose and punish them, so that others might learn that if they engage in such neglect in future, they too will be exposed and punished.