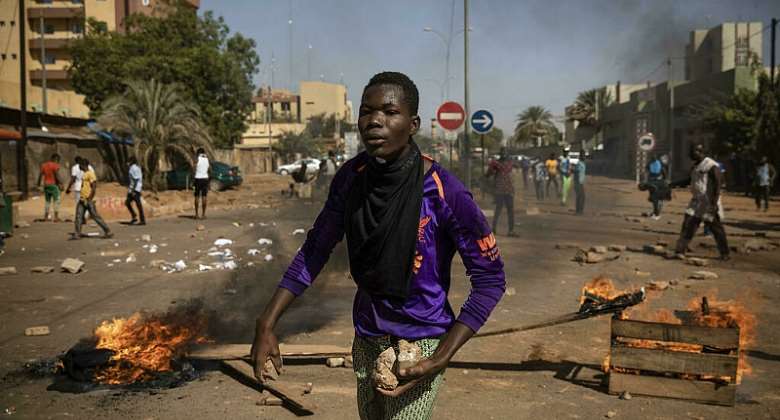 Security forces fired tear gas at protesters barricading the streets and throwing rocks in Burkina Faso's capital on Saturday, as anger grew at the government's inability to stop jihadist attacks spreading across the country.

“The jihadists are hitting (the country), people are dying, others are fleeing their homes … We want Roch and his government to resign because their handling of the country is not good. We will never support them,” said protester Amidou Tiemtore.

Some people were also protesting in solidarity with neighboring Mali, whose citizens are angry at the West African economic regional bloc, Ecowas, which imposed sanctions on the country after the ruling junta delayed this year's elections.

Burkina Faso's protest comes amid an escalation in jihadist attacks linked to al-Qaida and the Islamic State that has killed thousands and displaced 1.5 million people.

No end in sight

The violence shows no signs of abating. Nearly 12,000 people were displaced within two weeks in December, according to the UN.

Four French soldiers were also wounded during a joint operation with Burkina Faso's military, the first time French soldiers have been injured in the country since two were killed in 2019 during a hostage release operation, Pascal Ianni, spokesman for the chief of defense for the French armed forces, told The Associated Press.

France has some 5,000 troops in the region but until now has had minimal involvement in Burkina Faso compared with Niger or Mali.

This is the second government crackdown on protests since November and comes after the government shut down access to Facebook last week, citing security reasons, and after arresting 15 people for allegedly plotting a coup.

As tensions mount, the government is struggling to stem the jihadist violence. Last month the president fired his prime minister and replaced most of the cabinet.

The government's national security arm is also said to be preparing to reopen negotiations with the jihadists, according to a military official and a former soldier who did not want to be identified.

The last time the government negotiated secret cease-fire talks with the jihadists was around the 2020 presidential elections when fighting subsided for several months.

But locals say it's too late for talks and that the country is being overrun by jihadists who control swaths of land, plant their flag and make people abide by Shariah law.

”They just come and are squeezing people (out of their homes) and there is no (government) strategy,” said Ousmane Amirou Dicko, the Emir of Liptako.

For the first time since the conflict he said he no longer feels comfortable driving from the capital to his home in the Sahel.