Cameroon: More than a hundred detainees from Anglophone regions and opposition party languishing in jail for speaking out 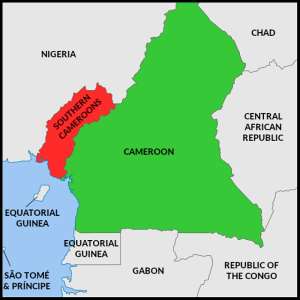 More than a hundred people from Cameroon’s Anglophone regions and its main political opposition party, arrested over the past five years for exercising their rights to freedom of expression and assembly, are still languishing in jail, where some have been subjected to torture and other ill-treatment, Amnesty International said today as it launches a new campaign to release them.

The campaign, ‘Don’t shut them up: Free victims of arbitrary detention now’, calls on the authorities to immediately release people arrested for peacefully exercising their rights to freedom of expression and assembly.

The campaign focuses on dozens of individuals from the Northwest and Southwest Anglophone regions, arrested for taking part in peaceful protests, and at least 107 supporters of opposition party Movement for the Renaissance of Cameroon (MRC).

“Over the past five years, the human rights situation has grown increasingly bleak as people from Anglophone regions, including journalists, human rights defenders, activists and supporters of political opposition, have been arrested and jailed for expressing their opinions or peacefully protesting,” said Fabien Offner, Amnesty International’s Central Africa Researcher.

Most of the jailed individuals were tried before military courts — in violation of international human rights law — and sentenced under the country’s repressive 2014 anti-terror law.

“We call on the Cameroonian authorities to immediately and unconditionally release all those incarcerated for practising their rights to free speech and peaceful protest. They should also rescind the overly broad anti-terror law, which has been used to criminalize protesters for years,” said Fabien Offner.

Thousands of people, including lawyers, teachers and human rights defenders, took part in largely peaceful demonstrations in late 2016 that called for greater rights in the two Anglophone regions.

More than 1,000 Anglophone people arrested between 2016 and 2021 in relation to the Anglophone crisis are behind bars in at least 10 prisons across the country, including 650 in Buea, 280 in Yaoundé, 181 in Douala and 101 in Bafoussam. Dozens have been arbitrarily detained.

According to testimonies gathered by Amnesty International, many of them were held incommunicado and suffered torture and other ill-treatment, including beatings and lashes, deprivation of food and water for days, mock drownings and forced extraction of fingernails.

On 25 May 2018, the Yaoundé military court sentenced eight people to lengthy prison sentences under the anti-terror law, including journalist Tsi Conrad, who was arrested in Bamenda on 8 December 2016 after attending a protest. Conrad was sentenced to 15 years in prison for terrorism-related offences. In May 2021, the UN Working Group on Arbitrary Detention said Conrad’s detention was arbitrary and called for his release.

Penn Terence Khan, the vice principal of a high school in Bamenda, was arrested on 17 January 2017 and sentenced on 10 April 2018 to 12 years in prison and fined 15 million CFA francs (23,000 euros) by the Yaoundé military court. His charges included “complicity in secession, financing of terrorism and complicity with the rebellion”, yet the only piece of evidence was a T-shirt with the words “Diaspora South Africa Standing behind West Cameroonians 4 a Federal Cameroon” and “We are Cameroonians, we are not extremists” printed on it.

Protest leader Ngalim Felix Safeh, a member of the separatist Southern Cameroon National Council party, was arrested on 29 November 2016 and placed in pre-trial detention on 7 February 2017. He was charged with “apology for terrorism, attempted murder, insurrection, group rebellion and degradation of public goods”. More than five years after his arrest, he remains in pre-trial detention. His case has seen nearly 90 adjournments before the Yaoundé military court.

Mancho Bibixy Tse, a protest leader and radio journalist based in Bamenda, was also tried before a military court and sentenced to 15 years in prison for terrorism-related offences.

“The Cameroonian authorities must end their relentless assault on dissenting voices in the Anglophone regions. All others who have been arbitrarily detained with their right to a fair trial violated, must also be freed”, said Fabien Offner.

As of 15 January 2022, 107 supporters and members of the MRC remained in detention after being arrested before, during and after taking part in demonstrations held in September 2020 to denounce the way upcoming regional elections were being organized, especially in relation to the Anglophone crisis.

A group of nearly 50 people were sentenced by military courts on 27 December 2021 for “insurrection”, “rebellion” and “endangering state security”. Olivier Bibou Nissack, the spokesperson for MRC President Maurice Kamto, and Alain Fogué, the MRC’s first vice president, were sentenced to seven years in prison for “revolution and rebellion” and “revolution, rebellion and gathering” respectively.

The next day, Awasum Mispa Fri, President of the ‘Women of the MRC’, was sentenced to seven years in prison for “complicity in revolution and rebellion”. Other MRC supporters were convicted and then released, having spent over a year in detention.

Numerous detainees are currently being held in prisons in Yaoundé, Douala, Bafoussam and Mfou. On 7 December 2021, Dorgelesse Nguessan was sentenced to five years in prison for “insurrection, assembly, meetings and public demonstrations” by the Douala military tribunal. Before she was transferred to Douala central prison on December 30, she was denied the right to wash in the police station where she was held and suffered an attempted sexual assault by a police officer.

Intifalia Oben, a 29-year-old trader and MRC supporter, was sentenced to five years in prison by the Yaoundé military court on 27 December. He was found guilty of “complicity in revolution and rebellion”. He was subjected to torture, including beatings and mock drownings, while in detention at the Defence Secretary of State (Secrétariat d’Etat à la Défense, SED).

MRC detainees have reported widespread use of torture and other ill-treatment by security forces, including the SED and the police in Yaoundé. On 5 November 2021, detainees at Yaoundé prison wrote to the President of the military tribunal to request their release and list the repeated violations of their rights.

A member of the Stand Up for Cameroon movement, Collins Nana, was arrested and after taking part in an MRC protest on 22 September 2020. He remains in detention after being sentenced to 18 months in prison by the Douala military court on 7 December 2021 for “insurrection, meetings and public demonstrations”.

Four other men from Stand Up for Cameroon —Etienne Ntsama, Moussa Bello, Mira Angoung, and Tehle Membou — were also arrested in September 2020 after attending a meeting at their Douala headquarters. They were sentenced to 16 months in prison by a Douala military tribunal on 31 December 2021 for conspiring to revolt, allegedly for having ‘mobilized’ ahead of the MRC’s 22 September marches.

"These frequent attacks on the rights to freedom of expression and peaceful assembly, coupled with the widespread use of torture and trials of civilians by military courts, reveal the extent to which the Cameroonian authorities are normalizing the repression of critical voices. Their relentless repression must end” said Fabien Offner.

Nkoranza youth clash with police over ‘suspicious’ murder of...
58 minutes ago