Surrounded by women, Molière denounced misogyny. But was he a feminist? 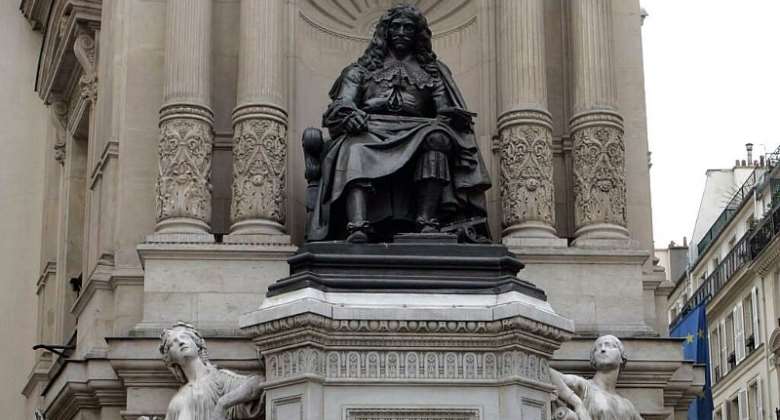 The 400th anniversary of French dramatist Molière's birth has sparked a revived interest in his satirical comedies that take aim at power relations. But while he denounced violence against women in some of his plays, others ridiculed educated women – and Molière did not question the patriarchal structure of the world around him.

Molière worked with women throughout his theatre career, and cast them in leading roles in plays he directed, including the 30 plays he wrote, many of which are part of the French literary cannon.

Satirical and comical, they often poke fun at authority. And though he addressed male hypocrisy in Tartuffe and denounced the abusive father in L'Ecole des Femmes (The School for Wives), it is difficult to call him a feminist – even one of his time.

“Molière calls out abuses by the patriarchy and male violence, but he does not question the patriarchy itself,” says Aurore Evain, an actor and director who has researched female playwrights of the 17th century. “He is not a feminist, that's for sure.”

This story is part of the Spotlight on France podcast. Listen here:

Others see Molière's portrayal of women differently. He is “a prophet of women's liberation – as much as the society of his time allowed him to be”, writes journalist Christophe Barbier in his book Le Monde Selon Molière (The World According to Molière).

Molière's plays often feature a clumsy male protagonist, inflated by masculine domination, Barbier writes, and “never, in any play, does a character who mistreats, humiliates, subjugates or underestimates women come out on top”.

The female characters are often the cleverest people on stage, and Barbier argues that Molière's men succeed only because of the women around them.

Evain says that Molière himself succeeded because of the women in his life. He started his first theatre company, Illustre Theatre, in 1643 with Madeleine Béjart, one of the first generation of women allowed to perform in the theatre.

Until the start of the 17th century, men played women's roles. Béjart, who came from a cultured family, had already established herself as an actror by the time she met Molière, and she became the administrator of their company.

“She was a model for Molière,” says Evain. “She taught him the acting trade, and may have taught him about writing, as there is evidence that she wrote, too.”

Molière worked with women like Béjart and others, who acted and wrote – but he also mocked them.

In his first major play, Les Précieuses Ridicules (The Pretentious Young Ladies), he makes fun of the women who gathered in salons, played intellectual word games and wrote works that were popular with female audiences.

In Les Femmes Savantes (The Learned Ladies) from 1672, two women who are drawn to the salon culture of the time, are ridiculed for wanting to marry and continue to educate themselves.

“Molière is a paradox in that he is surrounded by women who are, ultimately, 'learned ladies', but he mocks and goes after them in his plays,” says Evain, adding that his mocking if the 'précieuses' – which turned the concept into a pejorative term – hurt women who were starting to reach out beyond the bounds of what 17th century women in the were allowed to do.

“This is a time where women had more and more access to learning,” she says. And they were in a fragile position.

“They did not need to be attacked. On the contrary, they needed to be defended, and Molière is not on the side of the defenders.”

Although some were. Evain points to François Poullain de la Barre, a Cartesian philosopher who published a treatise on the equality of men and women in 1673.

“There were feminist men,” she says. Molière attacks them in The Learned Ladies in the form of the character Trissotin, depicted as a pedantic scholar, who Evain calls “an ally of the 'précieuses'.”

Molière acted and worked with women onstage, but also was inspired by female authors, whom Evain and other scholars have unearthed from the archives.

“At first I was not looking for them, because I didn't even think they existed,” Evain says of her research, which she started first by looking into female actors of the 17th century.

“I didn't think women could have been authors: that it was allowed at that time, or that they were able to write.”

And yet, when she started looking in the archives, Evain found plays written by women that had been published and performed regularly.

Evain staged it again in 2015, and points out the similarities between the play and Molière's Misanthrope, which he wrote a year after Le favori was first performed in 1666.

“There are themes and characters and verses that resonate enormously, and you can sense that this play was a source of inspiration,” she says.

Women authors of the 17th century were progressively forgotten as the history of French theatre was codified throughout the 18th century, notably by Voltaire.

“Voltaire was not a friend of female playwrights,” says Evain.

In his Le Siècle de Louis XIV (The Age of Louis XIV) from 1751, in which he lays out his vision of the king's legacy, Voltaire established the trio of Molière, Pierre Corneille and Jean Racine as the fathers of French theatre.

Perhaps he was motivated to sideline women after he was called out for plagiarism when he published Brutus in 1730, which lifted many lines and used the same storyline as Catherine Bernard's play of the same name that she published 40 years earlier.

Voltaire insisted that Bernard's play was written by Bernard de Fontenelle, a man.

Out of the shadows

“Their female leads are much less passive,” she says. “I find the issue of gender and the relationship between women and men to be more contemporary.”

As the plays written by Molière's female contemporaries are brought out of the shadows, Evain says they should serve to augment – and not replace – the literary cannon.

“While Molière was not a feminist, he has other qualities,” she says.

“This is not about cleaning up history. I object to the fact that female authors have been erased from history, but that does not mean we should erase the men.”

This story originally appeared in the Spotlight on France podcast. Listen here.