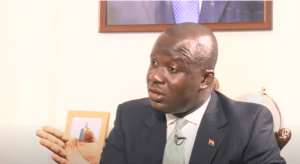 The Minister for Lands and Natural Resources, Hon. Samuel Abu Jinapor has ordered the Minerals Commission to suspend the licence of Maxam Company Limited with the commission.

This is after preliminary investigations into the explosion at Appiatse, near Bogoso in the Western Region linked the company to the vehicle carrying the mining explosives.

In a press release from the Ministry of Lands and Natural Resources, it says the Minister has directed the Minerals Commission to suspend the license of Maxam Company Limited.

“The Hon. Minister has directed the Chief Executive Officer of the Minerals Commission, with immediate effect, to suspend the registration of Maxam Company Limited with the Minerals Commission, thereby precluding the company from the manufacture, transportation and/or supply of explosives for mining operations, pending the outcome of investigations into this matter,” part of the release reads.

Meanwhile, the Minister, Samuel Abu Jinapor has also directed the Chief Executive Officer of the Minerals Commission to interdict the Chief Inspector of Mines with immediate effect, pending the outcome of the ongoing investigation into the tragic events which took place at Appiatse.

The Ministry of Lands and Natural Resources further assures the Ghanaian Public that the ongoing investigations will be thorough and comprehensive, and any public official found culpable will be made to face the full rigors of the law.

Read the press release from the Ministry below:

Serwaa Broni attack: Give us information to impeach Akufo-Ad...
6 minutes ago