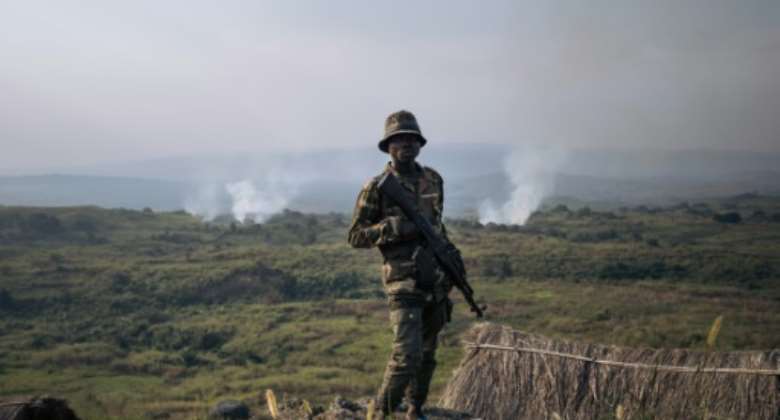 The Patriotic Resistance Force of Ituri FRPI has replaced the army and the state in Walendu Bindi chiefdom. By ALEXIS HUGUET AFP

In the northeast of the Democratic Republic of Congo, in a province under military control, a rebel militia administers a territory treated as a safe haven by displaced people.

The Patriotic Resistance Force of Ituri (FRPI), has replaced the army and the state in this corner of Ituri province since the collapse of a disarmament deal at the end of 2020.

The territory can be reached by a sandy track that winds through the hills and rocky outcrops south of the provincial capital, Bunia.

A young man in civilian clothes opens the barrier, a Kalashnikov assault rifle close at hand. We are granted entry to the chiefdom of Walendu Bindi.

FRPI militiamen live at a base in Bukiringi with their wives and children. By ALEXIS HUGUET AFP

Since late 2020, thousands of displaced people have arrived at the location, some 50 kilometres (30 miles) wide, seeking protection by the militia, even if it is only relative.

They fled massacres perpetrated in the neighbouring chiefdoms of Boga and Tchabi by the Allied Democratic Forces (ADF), an armed group that has sworn allegiance to the Islamic State organisation and has allies in a Hutu community settled in the area.

The FRPI is a militia of more than 1,000 men, created at the end of the 1990s to "drive out the Ugandan army which was invading Ituri", explains "Colonel" Munobi, spokesman for the movement, while attending a school inauguration ceremony.

Troops from neighbouring Uganda were hunting members of the ADF, which began as an uprising against President Yoweri Museveni's regime in 1996.

The FRPI signed a demobilization agreement with the Congolese state in February 2020, but seven months later the process fell apart after provocation blamed on both sides.

Militiamen have since repositioned themselves on the main roads and in villages to control all movement. They pride themselves on being a bulwark against ADF expansion.

At the southern end of Walendu Bindi chiefdom, an FRPI position dominates a deforested plain. Fighters in fatigues kill time in a camp made from straw.

"We set up these positions in June to prevent the ADF and their Banyabwisha allies from attacking the population and entering our chiefdom,' says self-proclaimed "Colonel" Jean-Robert Kufa Mbafele.

One of the patchwork of ethnic groups in eastern DRC, the Banyabwisha are Congolese Hutus living in Bwisha chiefdom in North Kivu, the troubled province to the south of Ituri.

Boga in southern Ituri province has been repeatedly attacked and dozens of people killed since 2020. By ALEXIS HUGUET AFP

At the foot of their hill outpost, a deserted track runs through the chiefdoms of Mitego, Boga and Tchabi, where villagers were traumatised in 2021 when more than 100 civilians were massacred.

Patrick Sande Loki, a traditional healer, remembers the attack last May 30. "It was around midnight. We heard voices shouting 'Open the door!' And just after, the bullets started to crackle."

Sande Loki managed to flee with some of his children but when he returned to Boga in the morning, he found his house burnt down, his mother killed with machetes and left in the rubble, and his wife who was severely burned. She died in hospital after two days.

The FRPI is a militia of more than 1,000 men. By ALEXIS HUGUET AFP

A week later, armed men stormed the same hospital, which iwas supported by Doctors Without Borders (MSF). "For four days, one of the wings continued to burn. Everything was looted," says administrator Jerome Wamara.

A report from the United Nations mission deployed in the DRC explains that in early June, ADF fighters came to recruit among the Banyabwisha around Tchabi, for $300 (265 euros) per recruit. Between 30 and 40 people, mostly minors, are said have joined them.

UN experts are concerned about "the strength acquired by the ADF among the local population".

In November and December, the Ugandan army shelled what it described as ADF strongholds around Tchabi. Since then, no soldier has gone to inspect the results of these operations on the spot.

Militiamen have repositioned themselves on the main roads and in villages to control all movement. By ALEXIS HUGUET AFP

"Until the beginning of December, there were only six Congolese soldiers for the entire chiefdom of Tchabi," said Augustin, a member of the Hutu community.

In a group discussion with displaced people, a representative of local youth warned that "if nobody handles this situation, the young people will form self-defence militias".

In 2020, several dozen members of the Banyabwisha community, accused of being invaders, were slaughtered in their fields in an attack attributed to the young people of Tchabi.

Ituri, like North Kivu, has been declared under a "state of siege" since last May. The measure has given full powers to the army to fight against armed groups that have plagued the region for more than 25 years.

But around Tchabi or Boga, the FRPI is considered by the population as a lesser evil, coexisting with authorities who are overwhelmed and left alone by the military.

A police officer gives an FRPI militiaman a lift on his motorcycle. By ALEXIS HUGUET AFP

Major Mulumba, a police commander, starts his Chinese motorbike and sets off on the track that goes back to Bunia. On the way, he gives a ride to a young man wearing a bulletproof vest, taking him to the entrance to Aveba, the stronghold of the armed group.

The militiaman thanks the police officer and returns to duty manning a checkpoint.