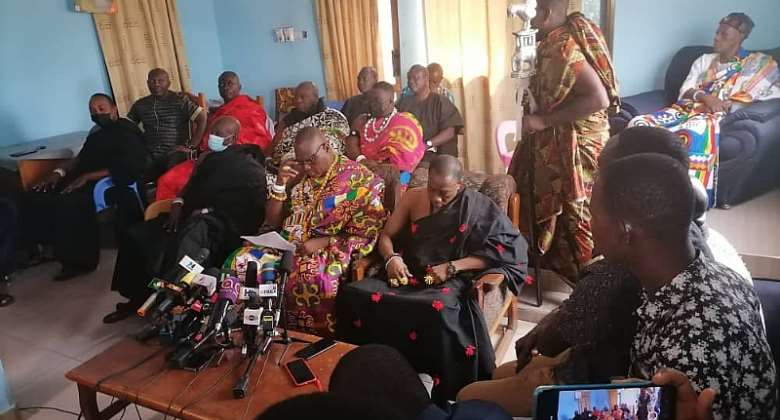 The Ada Traditional Council has officially declared it's position and condemned the violent attack on Radio Ada by some unknown youth in the community.

The attack which was carried out by some 8 unknown armed youth on Thursday, 13th January, 2022 at 11:30am, had properties of Radio Ada destroyed.

It was, however, as a result of the unknown youth expressing their displeasure over alleged false statements made over the recent developmental projects being carried out by ElectroChem Ghana Limited, a subsidiary of the McDan Group by the presenter and panelists of "Manor Munyu" a program aired by the station.

The said incident also saw some lives being injured as well causing fear and panic among staff of the Ada based radio station.

The Council in a press briefing with the media on Thursday, 20th January, 2022 stated their position and has condemned the uncultured action by the said youths.

Addressing the press on behalf of the Ada paramount chief, the Manklalo of the Ada Traditional Council, Nene Agudey Obitchere (III) stated that the traditional rulers have outlined strategic plans to bring the perpetrators to book.

"We call on all to corporate with the police and assist investigations when the need arises to bring the perpetrators to book to serve as a deterrent to all, but the unfortunate incident raises many concerns," he stated.

The council however, urged the Ada based media station to be professional in the disemination of informations.

"We wish to caution Radio Ada to desist from airing programs and making statements that stirr up tensions in our peaceful communities. Where as the dignified chiefs would want to address statements from radio stations that are deregatory in nature through the appropriate medium, some inexperience and lawless youths will do otherwise, we therefore urge the security service to be very vigilant.

"We call on the police to expedite investigations so that the culprit duely pinalized. However, in the meantime, we wish to advise Radio Ada to be professional in their reportage and handle their news items with decorum," he stressed.

He stated categorically that the council would not condone any false statements or acts of violence from any individual or institutions.

The council, however, called on the National Media Commission and the appropriate headquarters to monitor activities of radio stations in the country.

The chairman for the Ada Youth Forum for Development (AYFFD), Hon. Enoch Tawiah in an interview with the media expressed gratitude to the council for the support in providing sustainable jobs to the youth.

According to him, the introduction of ElectroChem by Mr. Daniel Mckorley to the Ada community is a well strategized initiative to provide more sustainability and jobs.

He used the opportunity to urge the teeming youth to rally behind McDan's initiative.

Mr. Enoch Tawiah also advised the youth to desist from engaging in violence act and practices.