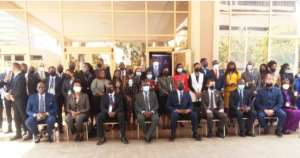 Minister for Communication and Digitalisation Hon. Ursula Owusu Ekuful has hinted that Government of Ghana is keen on contributing to curbing cybercrime in Ghana and the African continent.

She said government has taken a number of steps to create awareness and build the capacity of relevant stakeholders including the criminal justice sector to respond to cybercrimes and cybersecurity incidents.

In a statement read on her behalf at the opening session of a 4-day Regional Conference by the Commonwealth Secretariat involving 12 Commonwealth African countries, Cybersecurity Advisor, Dr. Albert Antwi Boasiako, said steps include working closely with the Council of Europe through the GLACY+ Project and the ECOWAS Commission through the OCWAR-C Project.

About three thousand five hundred (3,500) criminal justice officials, including Judges, Prosecutors and Investigators have been trained on cybercrime and electronic evidence in the last five years as a result of the initiatives.

“Therefore, this conference has come very timely to contribute to the ongoing capacity development activities to improve the domestic, regional and global response to cybercrimes.”

Dr. Antwi Boasiako noted that in the last five years as part of government’s commitment at the regional level, government has invested in a number of digital infrastructures and services across all sectors of the economy.

“Our focus on cybersecurity development in the last few years has placed us 3rd on the African continent and 43rd globally on the latest Global Cybersecurity Index (GCI) of the ITU.”

He assured governments commitment to improving investment in respect to cybersecurity issues in the subsequent years.

He however bemoaned the reluctance by the majority of African countries to ratify two highly important conventions thus, the Malabo Convention and the Budapest convention.

He further urged that “It is imperative that African countries see these conventions as critical tools for international cooperation."

Ghana’s Chief Justice, His Lordship Justice Kwasi Anin-Yeboah, noted that the increase in cybercrime in Sub-Saharan Africa is as a result of the inadequate resources for local law enforcement agencies and government security services to combat the menace.

“It is essential for law enforcement, prosecutors and the judiciary, as an arm of government to modify the way we work to function more effectively to cope with the new realities of the cyber-world. Law enforcement authorities must be able to strengthen their capacities to investigate cybercrime and secure electronic evidence which today, is admissible in the court of law.”

He therefore underscored the need for a rethink about the country's laws and also understand that our daily lives in this electronic age should reflect the changes used in cyberattacks which takes different forms.

However, Justice Anin-Yeboah, emphasized that “proper and effective legal frameworks must be built in our respective countries, to make the cases of such crimes unattractive to perpetrators who are all out to destabilize our countries.”

Head of the Rule of Law at the Commonwealth Secretariat, Dr. Tawanda Hondora, said the growing incidence of cybercrime requires countries to build effective laws, policies, and international cooperation frameworks.

He disclosed that they have been providing technical assistance to many Commonwealth member countries especially in Africa and the Caribbean region to help them strengthen their cyber frameworks, including their ability to deter and investigate cybercrime and ensure effective redress for victims of cybercrime.

He said, “Through this and other conferences, we seek to raise increased awareness on the scale, nature and impact, and crucial solutions, to the growing problem of cybercrime including here in sub-Saharan Africa”.

Dr. Tawanda Hondora, however expressed his deepest appreciation to the United Kingdom for its support in funding the project as part of its Cyber Security and Tech Conflict, Stability and Security programme.

The conference held at the Movenpick Ambassador Hotel in Accra spanned from Monday 17th January, 2022, to 20th January, 2022, is purposed to critically chart a way forward on addressing cybercrime in Sub-Saharan Africa.

The conference drew experts from across Sub-Saharan Africa, including investigators, prosecutors and senior judiciary, as well as Attorneys General and Authorities engaged in combating cybercrime, to enhance cyber-capability and resilience of regional authorities in western Africa in support of the Commonwealth Heads of Government’s Cyber Declaration, in London 2018.