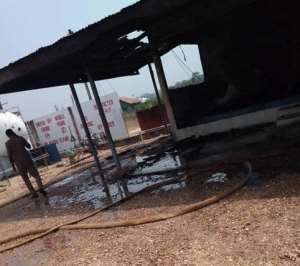 The timely intervention of the fire team quenched a fire outbreak which nearly cause an explosion at a Gas Filling station in Akwatia, the District capital of the Demkyembour in the Eastern Region.

According to reports, the Gas Filling station which is near the Otifilic Enterprise caught fire on Friday afternoon.

It’s unclear what led to the cause of the fire, but lucky enough the tanks were empty when the incident occurred.

A local reporter who confirmed the incident to DGN Online explained that the fire started in the place where they pump the gas but the timely intervention of the Ghana National Fire Service rushed to the scene on time to prevent the fire from spreading.

He said the situation has since been placed under control as the residents around are engaging in their normal activities.

Serwaa Broni attack: Give us information to impeach Akufo-Ad...
45 minutes ago