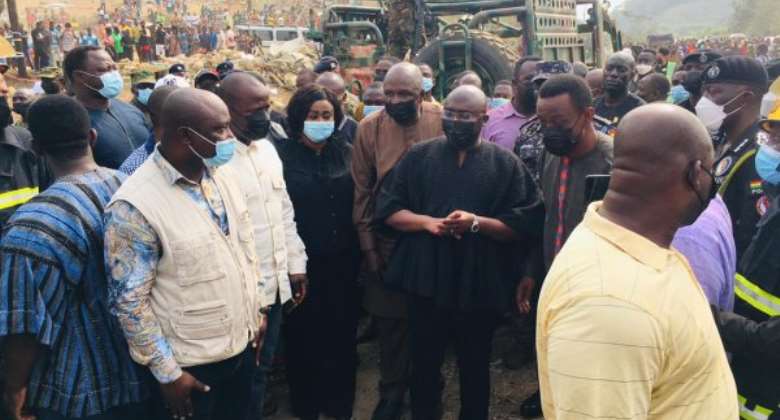 Vice President Mahamudu Bawumia has assured the residents of Appiatse that government would collaborate with the State Housing Corporation and mining companies to construct temporary housing facilities for those displaced in the explosion.

Government would also take up the medical bills of the injured and provide them the best of healthcare to ensure a speedy recovery.

Dr Bawumia, on behalf of Government, donated GHc200,000 to the bereaved families for their upkeep, while assorted items including mattresses, rice, cooking oil and toiletries were presented to 300 displaced persons accommodated at the Bogoso Catholic Relief Centre.

Vice President Bawumia gave the assurance when he led a government delegation to Appiatse on Friday, to assess the extent of damage caused by the explosion.

Dr Bawumia said: “Government, on its part, is going to do everything to support the families and those who have been injured. We are also looking into how to make sure that all those who are injured are taken care of.

"For the houses that have been destroyed, we are already beginning to think about how to rehabilitate and rebuild them for the community. I have already spoken to the State Housing Corporation and in consultation with the mining companies here, we will quickly try to put in place facilities that will help those who have been displaced. "

The briefing given by the emergency response team to the Vice President revealed that 13 people had been confirmed dead, 179 persons affected and 31 houses destroyed.

Forty-five injured persons are being treated at the Tarkwa Government Hospital, three dispatched to the Komfo Anokye Teaching Hospital in the Ashanti Region with some receiving treatment at Aseda Health Centre and Inner City Clinic at Bogoso.

The truck involved in the explosion was said to be carrying 10 tonnes of ammonium nitrate.

Four fire tenders from the Ghana National Fire Service and 11 ambulance vehicles from the National Ambulance Service were involved in the rescue efforts.

A preliminary investigation by the Police indicated that a DAF van with registration number WR 2252-18 driven by one Alfred Pappoe, moving from Tarkwa to Chirano Gold Mine allegedly collided with a motorcycle resulting in the explosion.

Isaac Kamanim of the Firearm Unit/Tarkwa was providing police escort to the truck.

Dr Bawumia said: "A major disaster befell us yesterday, not only for the community here in Appiatse, but it befell the whole of Ghana and that is why the President Nana Akufo-Addo asked me to lead this government delegation to come and assess the situation and see what we are going to do for the people.

“I have received briefings from the Police, the Fire Service, NADMO and the Chief. On behalf of the President and the government, we wish to express our deepest condolences to those who sadly lost their lives from this very sad incident."