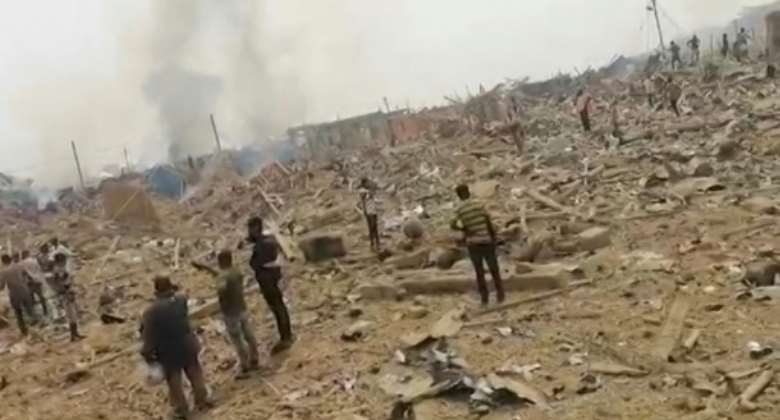 Ghana's government on Friday said it was investigating a massive blast involving a truck transporting mining explosives that killed at least 13 people and wounded dozens more.

The explosion on Thursday destroyed scores of homes and left a huge crater with wreckage strewn across the ground in the village of Apiate, 300 kilometres (180 miles) west of the capital Accra.

Authorities said initial investigation indicated the truck collided with a motorbike and another vehicle, triggering the blast.

"The investigation will among others help... to determine whether the regulations covering transportation of explosives were complied with and also what led to the unfortunate tragedy," the ministry of lands and natural resources said in a statement.

William Jabialu, police commander for the Prestea Huni Valley region, said the death toll had been revised to 13 from an initial 17 reported fatalities.

Another 45 people were being treated in hospital, he told local media.

Ghanaian President Nana Akufo-Addo called it a "sad, unfortunate and tragic incident" and expressed his condolences to the families of the deceased.

Map of Ghana, locating Apiate, some 300 km west of the capital Accra, where a truck carrying explosives collided with a motorcycle on Thursday, causing an immense explosion and a huge loss of lives, according to the Ghanaian president.. By Janis LATVELS AFP

Visiting the explosion site, Vice President Mahamudu Bawumia said the government would cover the cost of hospital bills and help with relief aid for those affected.

Abena Mintah, who witnessed the blast, told media the driver of the truck dropped down from his hatch, shouting at those nearby to warn them away from his vehicle that was in flames.

After the sudden blast, dismembered bodies lay in the street, he said.

Ghana has been hit by several deadly explosions from fuel accidents in recent years.

Ghana's capital was the scene of a similar fire and explosion in June 2015, when about 150 people died as they sought shelter from seasonal rains and flooding at a petrol station.

Prepare for hunger in Ghana — GAWU warn Ghanaians
15 minutes ago