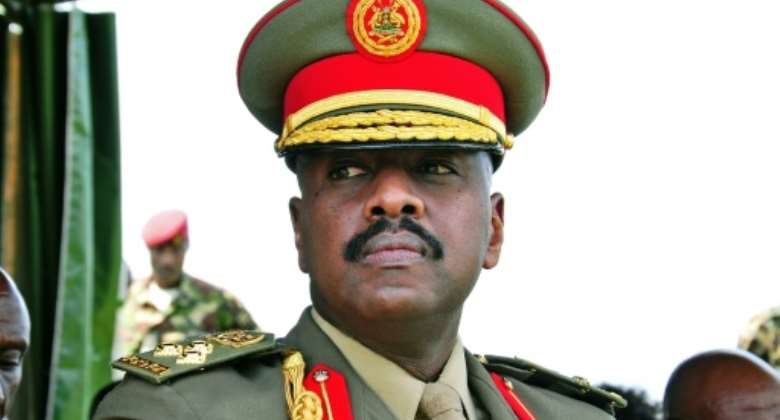 A prominent Ugandan author charged with insulting the country's ruling family appeared in court via videolink on Friday, with his lawyer saying he shows signs of torture.

It was the first time Kakwenza Rukirabashaija, 33, has been seen in court publicly since his arrest in December after posting critical comments on social media about President Yoweri Museveni and his powerful son Muhoozi Kainerugaba.

Rukirabashaija's lawyer Eron Kiiza told reporters outside a Kampala magistrate's court that scars detailed in a prison medical examination of his client were "obvious marks of torture".

He said the Prisons Service report issued on the eve of the hearing noted that Rukirabashaija -- who last year won an international award for persecuted writers -- had "healing scars of wounds sustained before being remanded to prison".

"He also had healing scars on the back, the buttocks, thighs and hands," according to the report which nevertheless concluded that the prisoner was in "good health".

The author spoke only once during the hour-long hearing to confirm he could hear the magistrate and stood, apparently without difficulty, for most of the proceedings before being offered a seat by a guard.

It was not possible to see any injuries as he was wearing clothes that covered most of his body -- a hoodie top, baggy trousers and a yellow face mask, as well as his distinctive black-rimmed glasses.

His defence team applied for bail at Friday's hearing, which was attended by representatives from several diplomatic missions including the European Union and United States.

But bail has been opposed by the state, and chief magistrate Douglas Singiza said he would give his ruling on the application on January 25.

Rukirabashaija was charged on January 11 with two counts of "offensive communication", an offence under the Computer Misuse Act which risks a one-year prison sentence.

His posts on Twitter included unflattering comments about Kainerugaba -- a general who many Ugandans believe is positioning himself to take over from his 77-year-old father -- describing him as "obese" and a "curmudgeon".

The author's detention has sparked calls from the United States, the European Union and civil society groups for his immediate release and protection from persecution.

He won acclaim for his 2020 satirical novel, "The Greedy Barbarian", which describes high-level corruption in a fictional country.

Rukirabashaija has been repeatedly arrested since "The Greedy Barbarian" was published. He has said he was tortured while being interrogated by military intelligence about his work.

Amnesty International this week launched a campaign calling for his release, saying "he is being detained solely in connection to the peaceful exercise of his right to freedom of expression".

Court adjourns case between Asanko Gold and GMWU to June 1 o...
1 hour ago