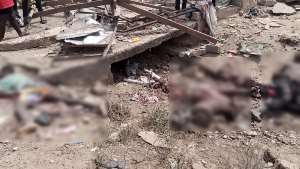 Several people are feared dead in Bogoso in the Western region following a scary explosion.

Information picked up by ModernGhana News confirmed that the explosion occurred at Apiate between Bogoso and Bawdie this afternoon.

It is reported that a vehicle carrying mining explosives from Tarkwa to Chirano mines collided with a motorcycle resulting in the explosion.

Several victims of the gas explosion at Bogoso have been admitted at various hospitals and clinics within the Bogoso Municipality, Modernghana News can report.

This has been confirmed by the Ghana Police Service helping the National Fire Service and the National Disaster Management Organisation (NADMO) to bring Thursday afternoon’s exposition under control.

The public has been advised to move out of the area to nearby towns for their safety while recovery efforts are underway.

Watch photos and videos below. Viewers discretion is advised: