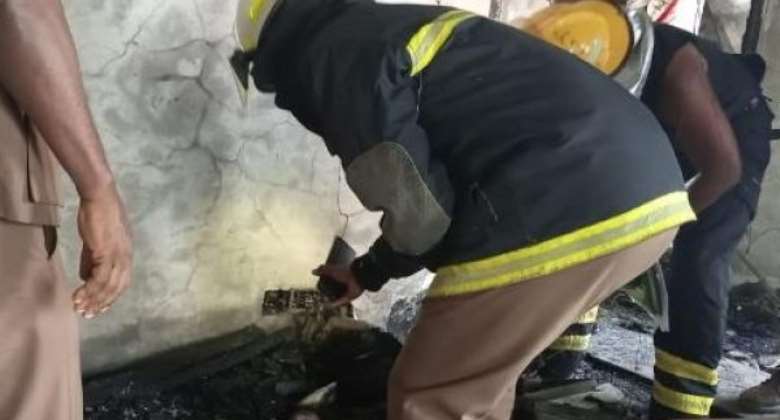 The Central Regional Command of the Ghana National Fire Service (GNFS) has assured of swift investigations into the cause of the fire that wiped out a family of seven at Big Apple, a suburb of Buduburam in the Gomoa East District on Saturday.

m“The Central Regional Command is optimistic about unveiling the cause of the fire to incorporate it into its fire safety education to avoid such incidents in future,” it said.

Assistant Chief Fire Officer (ACFO) John Amarlai Amartey, the Regional Commander of GNFS disclosed this when he visited the scene on Thursday.

The deceased are Mr Robert Assan, a 56-year-old headteacher, his wife and five children including a nine-month old baby.

He was accompanied by ACFO Ofori Ajei, Deputy Director of Operations and a team from the Regional Investigation Department.

ACFO Amartey observed from the scene that the fire might have started from the hall which was the only way out of the building and spread into the bedroom and therefore it became difficult for the family to escape.

He encouraged all home owners to have more than one home exit, to help avoid entrapment during emergency fires.

ACFO Amartey extended his condolences to the bereaved families and also praised the personnel of the Service at Buduburam Fire Station for responding swiftly and preventing the fire from spreading to the adjoining apartments.

Some co-tenants narrated their ordeal and pledged to support the Service carry out its investigations.