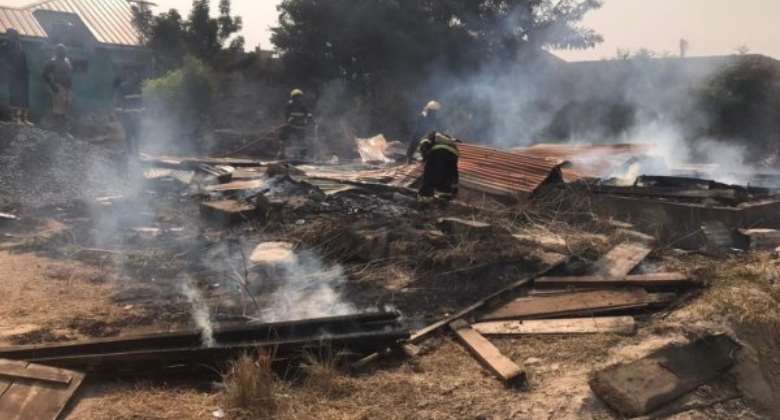 Fire has destroyed some wooden structures serving as living rooms for some squatters at Gbetseli Samco, a suburb in the Ashaiman Municipality of the Greater Accra Region.

Although there were no casualties, three structures were burnt to ashes rendering the residents homeless.

Divisional Officer III Richmond Vanderpuye, the District Commander of the Tema-Ashaiman Motorway Fire Station who confirmed the incident to the Ghana News Agency at Ashaiman said the Motorway Command of the Ghana National Fire Service (GNFS) had a distress call on Wednesday January 19, 2022 at 1432 hours in Gbetseli Samco.

The Fire Team was dispatched to the scene and upon arriving at 1457 hours it was observed that the fire involved three wooden structures.

DOIII Vanderpuye said the fire which was met at its heightened stage burnt down the structures.

He said the fire was brought under control at 1505 hours and finally doused at 1514 hours; "The three structures were totally burnt. No casualty was recorded".

The Fire Commander said preliminary findings linked the cause of the fire to the burning of rubbish that was unattended and explained that the GNFS engaged members of the community on safety practices to prevent similar undesired fires.

He said the personnel advised the public to call the Fire Service promptly through 112/192 any time there was a fire outbreak.