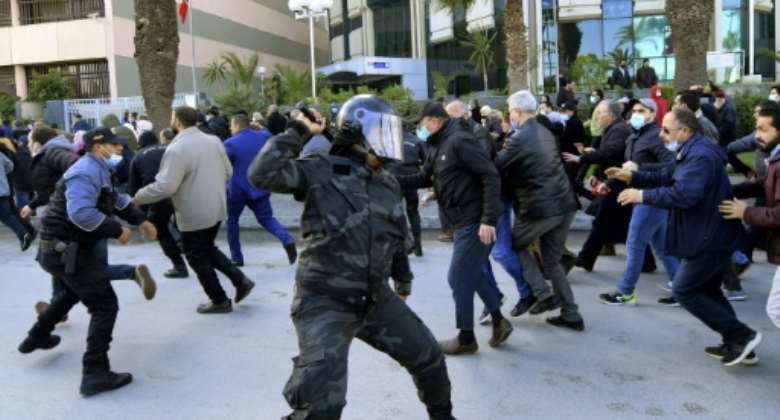 Tunisian demonstrators run for cover during clashes with police during a protest against President Kais Saied, on the 11th anniversary of the Tunisian revolution in the capital Tunis on January 14, 2022. By FETHI BELAID AFPFile

Tunisian President Kais Saied assured Thursday that the country's freedoms are "guaranteed" after rights groups warned of a threat signalled by the violent suppression of an anti-Saied protest.

Civil society groups and Saied's political opponents have expressed fears of a return to authoritarianism in the only democracy to have emerged from the Arab Spring protests over a decade ago.

In a meeting with Interior Minister Taoufik Charfeddine, Saied said he "affirms that freedoms are guaranteed in Tunisia, recalling his commitment to equality before the law and his rejection of violence", the presidency's official Twitter account said.

Police on Friday cracked down heavily on hundreds gathered in a rally against a July 2021 power grab by Saied, which some have dubbed a "coup".

An inquiry has been opened into the death of a 57-year-old man who was found unconscious during the protest. His death was described by the Islamist-inspired Ennahdha party as a "murder".

The capital Tunis had not witnessed such scenes for a decade. About 20 journalists were manhandled during the protest, which fell on the 11th anniversary of late dictator Zine El Abidine Ben Ali's flight into exile.

"It is clear that freedoms are threatened and face an imminent peril," Yassine Jelassi, head of the Tunisian National Journalists' Union (SNJT), told a press conference organised by 21 human rights groups on Tuesday.

The following day, Reporters Without Borders (RSF) voiced concern that the "gains of the revolution" could be diluted and expressed fears of an "authoritarian turn" in the North African country.

On July 25, Saied suspended parliament, dismissed the prime minister and said he would assume executive powers. Then in September, he took steps to effectively rule by decree.

Some Tunisians, tired of the inept and graft-ridden parliamentary system, welcomed his moves.

He has laid out a roadmap for drafting a new constitution before elections at the end of this year.