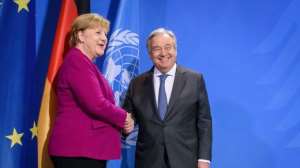 Angela Merkel has turned down a job offer from UN Secretary-General António Guterres at the East River headquarters in New York. The former Chancellor "phoned the UN Secretary-General last week, thanked him and informed him that she would not accept the offer," her office told the German Press Agency on Wednesday.

Guterres had offered the 67-year-old, former German head of government, Merkel, the chair of a high-level advisory body on global public goods that could potentially serve the entire world population across national borders. Examples of global public goods are the ozone layer, but also depending on the definition, internationally applicable regulations such as those on flight safety and global trade. At the United Nations, the probability that she would accept the job offer was assessed as rather low anyway.

The Advisory Board on Global Public Goods is one of Guterres' flagship projects on United Nations reform in his second term, which began in early January. In his report on transforming the UN last year, the Secretary-General wrote: “I will ask a high-level advisory board, led by former leaders, to identify global public goods and other areas of common concern where improvements in governance are most urgently needed required are."

Guterres apparently wants to hire Merkel for the United Nations.

According to the UN Secretary-General António Guterres, the corona pandemic has revealed major gaps in international cooperation. The envisaged advisory body should provide the impetus for renewing practices and principles for action on a global level.