CLOGSAG calls off strike, orders members back to work 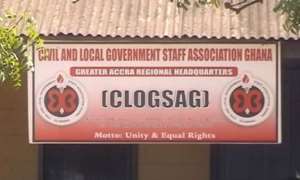 Civil and Local Government Service Staff Association of Ghana (CLOGSAG), has called off its strike action.

CLOGSAG has therefore ordered its members to return to work on Monday January 24, 2022.

A press release issued Thursday January 20, 2022 by CLOGSAG signed by Isaac Bampoe Addo, Executive Secretary of CLOGSAG stated that “The National Executive Council (NEC) of the Civil and Local Government Service Staff Association of Ghana at its meeting held Thursday January 20, 2022 has reviewed it Memorandum of Understanding (MoU) between the government and CLOGSAG.

“The National Executive Council (NEC) of CLOSGAG, has therefore, decided to call off the strike.”

Earlier, CLOGSAG agreed with government to call off its ongoing nationwide strike with immediate effect, an official communication from the Fair Wages and Salaries Commission (FWSC) on Thursday said.

“Yesterday the government reached an agreement with the leadership of the Civil and Local Government Service Association, Ghana (CLOGSAG) which culminated in the signing of an MOU.

“The agreement granted some aspects of demands concerning their conditions of service with others being work in progress,” it continued.

The statement concludes that “In that same MoU, CLOGSAG, on the basis of the agreement committed to calling off the nationwide strike with immediate effect.”

Last year, the Association threatened to embark on industrial strike action because the conditions of its members have been overlooked while other services had an enhanced salary structure.

According to the CLOGSAG, a year after its proposed salary structure was sent to the Ministry of Finance to address their concerns, the Ministry is yet to respond despite persistent reminders.

The Association noted that it feels sidelined, hence, the need to withdraw its services.

Nkoranza youth court case: Police have proven that TV sets a...
50 minutes ago