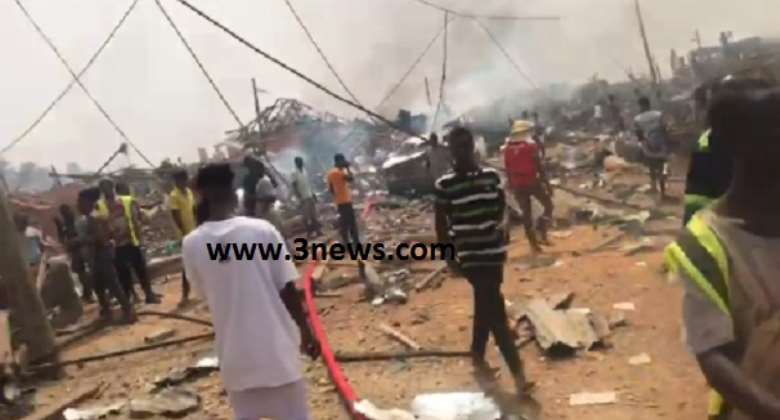 The Coordinator of the National Disaster Management Organization (NADMO) for Prestea Huni-Valley, Francis Abeiku Yankah, has said the community, Apiati near Bogoso in the Western Region where the explosion occurred, is a dead community.

He told TV3 in an interview that the community can no longer be inhabited by anyone due to the devastation.

“I was returning from Prestea when I heard an explosion on my way. I started moving towards the scene after a journalist had called me on phone informing me about what had happened.

“Upon reaching the area, I saw a complete devastation of the community called Apeati, as we speak the community is dead, it cannot be inhabited by anyone.

“Ten lifeless bodies were lying down as a result of the explosion. The MCE who was also informed about the news quickly dispatched excavators to the scene to rescue trapped bodies after some buildings collapsed,” he told TV3’s Geogre Kwening on Thursday January 20.

Meanwhile, the Police has said preliminary investigation established that a mining explosive vehicle moving from Tarkwa to Chirano mines collided with a motorcycle resulting in the explosion.

The Police appealed to nearby towns to open up their classrooms, churches etc to accommodate surviving victims.

“The public has been advised to move out of the area to nearby towns for their safety while recovery efforts are underway. An appeal is also being made to nearby towns to open up their classrooms, churches etc to accommodate surviving victims.

“Reinforcement of resources and personnel have been deployed to effectively handle the incident. We continue to urge the public to remain calm as we manage the situation. Further updates regarding the emergency evacuation of the injured will be communicated in due course,” a statement said.

The Police had assured that it was managing the situation.

An earlier statement by the Police on Thursday January 20 said “Emergency Public Notice!A huge explosion occurred this afternoon, Thursday, January 20, 2022, at Apiate between Bogoso and Bawdie in the Western Region.

“The Police and other emergency service providers have activated a full emergency recovery exercise. We urge all to remain calm as we manage this unfortunate situation.”

Prepare for hunger in Ghana — GAWU warn Ghanaians
47 minutes ago