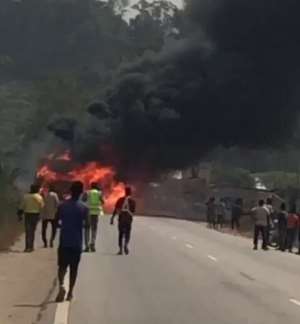 Several people are feared dead in Bogoso in the Western region following a scary explosion.

Information picked up has confirmed that there has been an explosion at Apiate between Bogoso and Bawdie this afternoon.

It is reported that a vehicle carrying mining explosives from Tarkwa to Chirano mines collided with a motorcycle resulting in the explosion.

While information is still trickling in, sources have told Modernghana News that many people are feared dead.

Reports are that fire fighters have rushed to the scene helping to bring the situation under control.

While it remains unclear what might have caused the explosion, a source has confirmed that in addition to the loss of life, properties have also been destroyed.

Modernghana News remain in contact with its source and will provide more information soon.