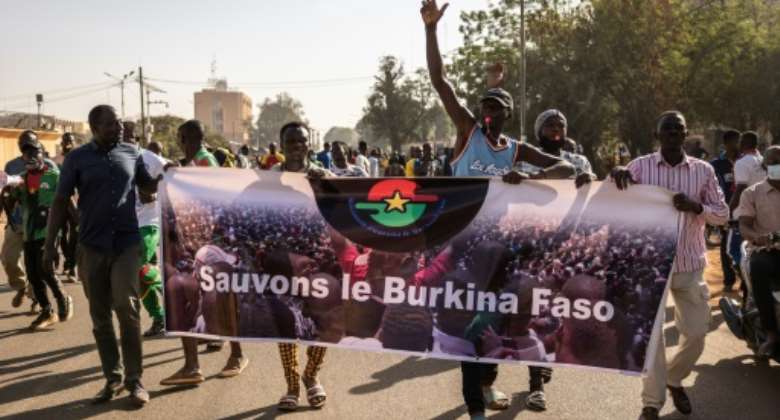 A dozen protesters were hurt in clashes with security forces during the November 27 protest, also banned. By OLYMPIA DE MAISMONT (AFP/File)

Authorities in the Burkina Faso capital on Thursday banned two planned weekend protests at lack of security in the troubled West African nation, where a November 2021 rally turned bloody.

One demo, called for Saturday by a civil society movement called Sauvons le Burkina (Save Burkina), was prohibited for "security reasons", municipal secretary Christian Charles Rouamba said in a letter.

The same group staged a protest on November 27 against the failure of President Roch Marc Christian Kabore to quell jihadist violence that has engulfed the former French colony.

That demonstration, which drew hundreds of protestors, was also banned, and around a dozen were injured in clashes with security forces.

A separate demonstration also planned for Saturday in support of neighbouring Mali -- whose ruling junta is under sanctions imposed by the regional Economic Community of African States (ECOWAS) -- was also banned.

Two officials of the Coalition of African Patriots-Burkina Faso, which had called the demo, were detained on Thursday, the group said.

Groups linked to Al-Qaeda and the so-called Islamic State group have plagued the landlocked Sahel nation since 2015, killing about 2,000 people, according to an AFP tally.

Around 1.5 million people are internally displaced, according to the latest figures released by the national emergency agency CONASUR.