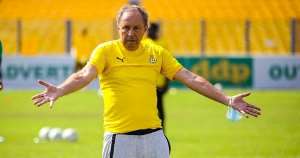 The Managing Editor of the Daily Dispatch Newspaper, Ben Ephson has advised the Ghana Football Association (GFA) to retain Milovan Rajevac as the head coach for the Black Stars despite the poor showing at the 2021 TotalEnergies Africa Cup of Nations (AFCON) tournament.

The underfire Serbian tactician is likely to be sacked by the Ghana Football Association by close of this week as Ghanaians vent their anger over the shocking exit of the Black Stars from the group stage.

For Ben Ephson, it will be in bad faith to sack Milovan Rajevac after the AFCON disaster.

According to him, the coach should be helped to prepare a team strong enough to cross the final hurdle of the 2022 FIFA World Cup qualifiers that will be played in a few months’ time.

“We are behaving like the English League system no matter how good a coach you are if the results don’t favor you, we sack you.

“Comoros used us to make history, they have never scored a goal at AFCON before.

“If you go and bring in a new coach you are now going to try his system and you don’t have enough time to prepare for the World Cup Qualifiers,” Ben Ephson who is a renowned pollster told Starr FM in an interview.

Daily Dispatch Newspaper editor further noted that Ghana attempted to achieve something it had not prepared very well for.

In his words, he said, “I think that Ghana is paying a price for trying to harvest what we have not planted in sports.”

Unfortunately, the team Ghana presented was not good enough to go past group opponents Morocco, Gabon, and Comoros.

On Friday, January 21, 2022, the Sports Ministry will hold an emergency meeting with the Ghana FA to discuss the way forward to get things right for the Black Stars.

The channel we used was the same channel Joy FM used to get ...
20 minutes ago