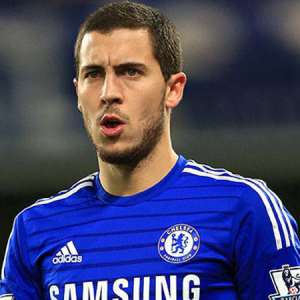 “To my Chelsea friends and family. You now know that I will be joining Real Madrid. It’s no secret that it was my dream to play for them since I was a young boy just scoring my first goal... Now, the Clubs have reached an agreement I hope you understand I had to pursue my next chapter, just as each and every one of you should when you have the chance to pursue your dreams."

After seven years, 352 games and 110 goals for the Chelsea, Eden Michael Hazard, one of the finest footballer of his generation bid a farewell to a Club that made him a star and and shot him to global sight. Warm streak of tears almost made its journey down my cheeks as I read his heart-melting farewell message. You would be wrong if you think I'm a Chelsea fan. Well, I hope you take it as a normal football banter if I tell you Chelsea is a team I loathe - no thanks to the irking noise and hooliganism of their fans, many of whom would not only have painted the sky blue; but the soil, hills and every other creations, were they powerful to do that. A reason they are fondly addressed "Agbero FC" - a football club of raggedy bus conductors.

The unmatched trio of Ronaldo, Rooney and Tevez in 2008 had successfully arrested my initial interest in football, that I found myself nursing deep affection for a Man U, a team that housed three destructive fronts who makes defenders suffer and got many nets pregnant. What triggered my emotions for Hazard was what would trigger that of many other football lovers - sheer emotional football moments. Seeing a full-fledged player like Hazard who coupled as a king among his peers leave his comfort zone, typically, would call for emotion.

Fit. Flexible. Technical. Tactical. Hazard did not only made football a pleasure to watching fans, he was also a toast of his fellow players. "Hazard has a lot of quality. He is a different football player who can unbalance [defences]..." said Lionel Messi, the second best player to kick the ball. The best to have, Cristiano Ronaldo, also lauded Hazard when he listed him among 10 other outstanding players who could succeed him. So exceptional Hazard was, that his Former teammate, Nnemanja Matic said "Whenever I don’t know what to do with the ball I just give it to Eden! He usually finds a way to create an opportunity." But then, what made Hazard, a once lion in the games who roars hardly become a powerless dog who could no longer go for a successful kill?

Following his (£86/$120m) massive transfer from Chelsea in 2019, Eden have only contributed four goals and seven assists to the Blancos cause, and has rather been graduating from one injury to the other. A funny moment I recall, when a Nigerian football enthusiast, who like many other emotional Nigerians, made an emotional stance that Hazard could be having series of injuries because "the player who benches him at Real Madrid, Vicius Jnr is a Brazilian, and you know Brazilian deals alot in voodoos". So my funny friend said. Well, his emotional stance was wrong but his assertion about Brazil and voodoo could be right. According to New York Times, a fact-driven website, Brazil had developed many cults practices and diasporic spiritual beliefs which had spread throughout the country like the Candomblé, which came on board via the syncretism of the West Africans, who were at a point, slave captives in Brazil. That they take advantage of the venerated "orixas" for occultistic attacks. The fact, however, would not jettison the fact that Nigerians maintain a notable share in emotional talks and are quick to attach spiritual sentiments to human difficulties; but would it be fair to say a young Vicius Jnr could be so mean that he had attacked Hazard spiritually? I couldn't contain this laugh. My dentition is currently widely-opened. Lol. Do not mind me. But, the emotional sentiment was an unhealthy spit that shouldn't remain in the mouth, so I let it out and rather seek the "fact" that wins over emotions, anytime.

While Hazard should have rather made a tap from the success principles of footballers like Messi and Ronaldo who he looked up to, Eden wrecked his own career with careless and not-too-good intakes for a footballer who seek fitness and consistent appearances. Pizza, Burgers, Buns and other junks which are liable to cause injury or affect a footballer's fitness were what Hazard found solace in consuming, time to time. Despite the many warnings he received. On his own choice of foods, listen to what he said while recovering from a calf injury that he suffered in late-February 2021: "The sauce on burger was my favourite thing. I'm trying not to eat a lot. I'm trying not to go into the pantry to eat a lot of buns, but it's not easy" he told RTBF. His former Chelsea teammate and Chelsea Goalkeeper, Marcin Bulka, also revealed Hazard's penchant for some greasy junk food: "He loves hamburgers and pizza, I saw him all the time in pizzerias,” he said, as per Goal. “He doesn’t care about anything other than football and having a good time. In Chelsea, this was not a problem, but at Real, especially with the recent injury, he probably went a bit overboard with the weight.”

Away from Hazard's junks, he is also a lazy player who was described as the "most lazy player I've ever played with" according to his former Chelsea teammate, John Obi Mikel. The reportedly lazy Hazard has been listed among his Former teammate, Felipe Luis as one of the best players he (Filipe) has ever played with, but his laziness has not really helped him. Hear Filipe: "Eden, along with Neymar, are the best players I have ever played alongside - up there with [Lionel] Messi. But He didn't train well. Five minutes before the game he would be playing Mario Kart in the dressing room. He would warm up without tying his bootlaces up." Luis told the Daily Mail. Hazard's former coach, José Mourinho also lamented his laziness. Hear José: "The truth is what you see from him, he is an amazing player with awful training. When he gets onto the pitch you don’t see the reflection of a week of work, you just see a reflection of his talent." Mourinho said during an interview with talkSPORT.

Unprofessional intakes and laziness had wrecked Hazard's fitness and career, that he got to Madrid with extra five kilos overweight and have faced series of debilitating injuries. Right to say he brought himself fame but ruined his game with careless enjoyment and laziness. He watched his own talent get clipped, shorter than he had wished. Like Hazard, like Neymar, the duo of who were kings in their games and supposed successors of the two best players in football history - Ronaldo and Messi - but ended up watching their talent recede because of unprofessional enjoyment and laziness. Like Hazard, Like Neymar, Like Nigerian Youths. Many of the latter who have unlimited stream of talents, but watch it vanish like vapour with their careless enjoyment and laziness. They spared no listening ears to John C Maxwell's message that, "Talent Is Never Enough". Everlasting professionalism is never gifted on platter of gold; it requires relentless works, determination, sacrifice and many other principles.

6 out of 10 talented Nigeria would rather blame the Government for their shinning penury, even while they have thrown hardwork and success principles through the window. Success without patience, result without consistent hardwork have overwhelmed their thoughts. The others would rather take all sort of hard substances, unhealthy junks and everything that could mar their health, sanity and profession, all in the name of enjoyment, forgetting there could be negative effects to all they consume. But in the end, all blames fall back to the Government. This makes it expedient to remind Nigeria Youths that many of what they take or decision they make today will either make or mar their future and career. Laziness or careless enjoyment spoils long time dream. Like I asserted in one of my quotes, "Hardwork is sweet and fulfilling, laziness is sh*t and wrecking".

Before I sheathe my pen, I hope Nigerians would rather tap success inspiration from Ronaldo/Messi who maintained their fitness and professionalism at the riddance of laziness and careless enjoyment, and not Hazard and Neymar who watch their talent recede because of laziness and unprofessional intakes. Longlasting success requires hardwork, sacrifice, principles; and not "anyhowness".