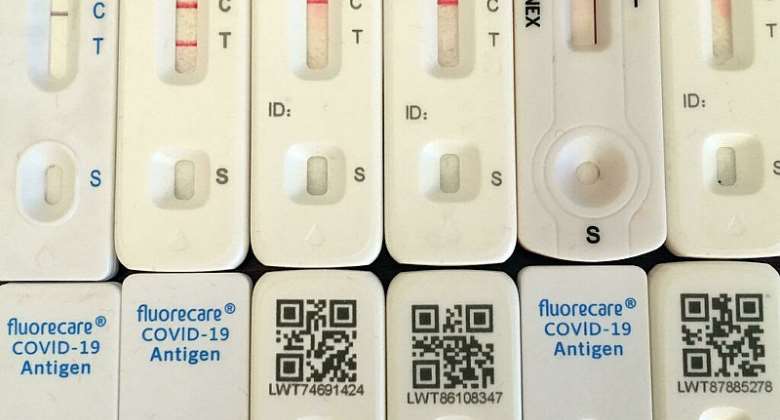 With the Omicron variant of Covid-19 wreaking worldwide havoc, the demand for tests is exploding. Companies producing test kits are living through a golden age. But it is mainly Chinese companies which are scooping up the profits, with just a few French test-makers jumping on the bandwagon.

"The stock price of Orient Bio has gone crazy!" according to Chinese market analyst Finance World, commenting on the performance of Zhejiang Orient Gene Biotech, owner of Healgen Scientific, one of 56 companies that the government in Paris has allowed to sell autotests on the French market.

Figures released on 14 January and reported by China's Security Times show profits of over 710 million euros for 2021 for the company, an increase of 205 percent over 2020. And the demand for tests is growing rapidly with the arrival of Covid-19's Omicron variant.

This latest mutation is thought to be less deadly than its predecessors, but it has a scary capacity to spread at the speed of lightning. In France, numbers jumped from just over 5,000 on 15 October to almost half a million new cases in a single day on 18 January, a one-hunderd-fold increase over a three-month period.

In September 2020, the economic daily Les Echos reported that French health authorities had allotted 2 billion euros for Covid-19 tests. The social security services agreed to reimburse 73,59 euros for a PCR test, and "about half of that" for antigenic tests.

One year later, the newspaper reported that for 2021, the estimated budget for testing had more than doubled to 4.9 billion euros, with the number of tests increasing dramatically after the introduction of the "passe sanitaire," the vaccination pasport which became obligatory for those wishing to enter public buildings, restaurants or cinemas.

Tens of thousands of health workers were mobilised to facilitate the tests. The site Santé.fr reveals a widespread network of some 72,260 Covid-19 test centers in metropolitan France, involving pharmacies, general pracitioners, specialists and laboratories. In the overseas territories of French Guyana, Guadeloupe, Martinique, Mayotte and Réunion, another 2,472 centers are active.

100 million tests was just the beginning

But after French health workers had performed a total of 100 million tests in July 2021, French President Emmanuel Macron announced that PCR tests made without a doctor's prescription would no longer be reimbursed "to encourage vaccination rather than (having) a multiplication of tests." By January, pharmacies started to scale down testing and supermarkets were allowed to sell self-tests until the end of the month.

The French government has put a price limit of 5,20 euros on self tests, but they are given free of charge to people who are fully vaccinated and who came into contact with a person who has Covid, as well as to children under 18 years old.

And from 29 December 2021 through the end of January 2022, the French health ministry authorised supermarkets to sell self tests following the exceptionally brutal increase of Covid-numbers as a result of the Omicron variant.

Meanwhile, the French Ministry of Health has published a list with the tests it has approved: currently 585 different tests produced by 234 companies are allowed to be used - with the number of companies growing on a daily basis.

French test manufacturers have had problems keeping up with the mainly Chinese competition. Of the 56 self tests approved by the French government, the majority, 37, are manufactured by different Chinese companies, only 7 by French producers and the rest by a handful of German, Turkish and South Korean companies.

The France companies that managed to break into the niche do good business. Biospeedia, a company based in Saint Etienne (Loire) started selling self-tests in April 2021. Julien Tizot, in an interview with French daily Le Parisien, said that his company had the capacity to produce 2 to 4 million tests per month.

Another French company, Biosynex, announced that it will put a 30 minute PCR test on the market in February. Before the pandemic started, the company's turnover was 35 million euros, a figure which has increased almost ten-fold, to 310 million euros. The share price increased by a factor of five since the first lockdown in France on 16 March 2020. Until then, the price had been hoovering around 4 euros, at the end of 2021 it had shot up to 22 euros.

In December 2021, with the explosion of the Omicron variant, the demand for self tests grew accordingly. French company AAZ, which prides itself on inventing the first French HIV self test in 2015, hopes to produce 12 million tests for January 2022 alone, against 30 million for the whole of 2021, which will contribute to the good fortunes of the company.

But it is the Chinese companies that are reporting astronomic profits.

Chinese producers enjoy "advantages" their French counterparts don't have: low production costs as a result of the absence of implementation of labour laws; strikes and demonstrations are often dealt with in a merciless way with strike leaders ending up behind bars; the complete absence of independent labor unions; long working days, and wages that are a fraction of those paid in the West.

Hong Kong based China Labour Watch reported that workers in one face-mask factory were putting in12-hour days for 800 euros per month.

Pressure on workers in Chinese companies that managed to get licences to export abroad is increasing. According to Finance World,  the business performance of Zhejiang Orient Gene Biotech Co.,Ltd mainly depends on "the sales performance of home self tests sold on the European market," warning for "fierce competition" of similar - mainly Chinese - products.

According to the South China Morning Post, the company, which is one of the world's largest Covid-19 test manufacturers, "hired 2,500 temporary workers on a single day" recently, adding that this could add up to a total of some "15,000 temporary workers on day and night shifts – more than 10 times the number of its permanent staff."

In France, new workers are attracted too, but on a more modest scale. RFI reported earlier this month that a company like diagnostic toolmaker NG Biotech increased staff "from 30 to 220 employees" ... a tiny number compared to the masses of workers who are employed by its competitors in China.

Yet the French are worried about the sudden and brutal growth in demand for the tests.

Joseph Coulloc'h, founder of AAZ, complained in an interview with France Inter that the company "has reached a saturation point. If we go on like this, there's the risk of industrial accidents."