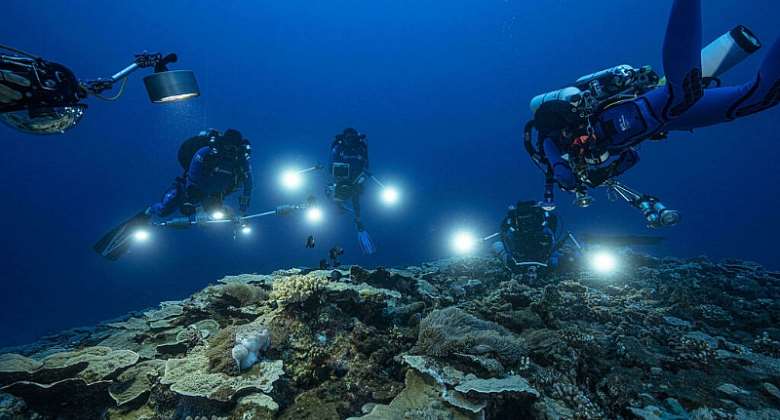 Scientists have discovered a coral reef off the coast of Tahiti, untouched from the effects of warming oceans – a discovery that shines a light on how oceans could be adapting to climate change.

The reef is one of the biggest in the world, more than 30 metres under the surface of the water, according to UNESCO, which supported a dive expedition in November and December that allowed scientists to take a closer look.

"The pristine state of the rose shape coral and the spread of the zone they cover make this a very unusual discovery,” Unesco said in a statement.

Some of the corals measure more than two metres in diameter, and probably took around 25 years to grow.

Coral reefs are ecosystems formed by tiny organisms, coral polyps, held together with calcium carbonate, which are fragile and susceptible to disruption by fishing and pollution.

Most of the world's known coral reefs are found in shallow waters, making them vulnerable to heat waves due to climate change.

But the three-kilometre long reef discovered near Tahiti shows no signs of stress, probably due to its depth, 35 to 70 metres under water - deep enough to protect it from the bleaching effects of the warming ocean.

Most of the world's known coral reefs are in warm, shallower waters, up to 25 metres down, and are bleached during heat waves, losing their colour and struggling to survive.

Australia's Great Barrier Reef is perhaps the most famous to suffer this fate, with severe bleaching affecting an estimated 80 percent of its corals since 2016.

Corals in French Polynesia that were closer to the surface were affected by a bleaching event in 2019.

French photographer Alexis Rosenfeld, who led the team of international divers that made the discovery was amazed by the find.

"It was magical to witness giant, beautiful rose corals which stretch for as far as the eye can see. It was like a work of art," he said.

Laetitia Hédouin, a researcher at the French National centre for scientific research (CNRS) in Moorea, French Polynesia, first saw the corals months ago, during a recreational dive with a local diving club.

She determined it was worth looking closer, because the corals looked healthy.

The expedition involved 200 hours of dives in November 2021, using specialised equipment to permit divers to go so deep.

Scientists left devices to measure temperature by the reef as part of a long-term surveillance programme to better understand how this reef has survived the effects of climate change.

The discovery suggests there may be many more unknown large reefs in the oceans, given that very little of the seabed has been mapped, according to UNESCO scientists.

Akufo-Addo cuts sod for $90million University of Engineering...
38 minutes ago