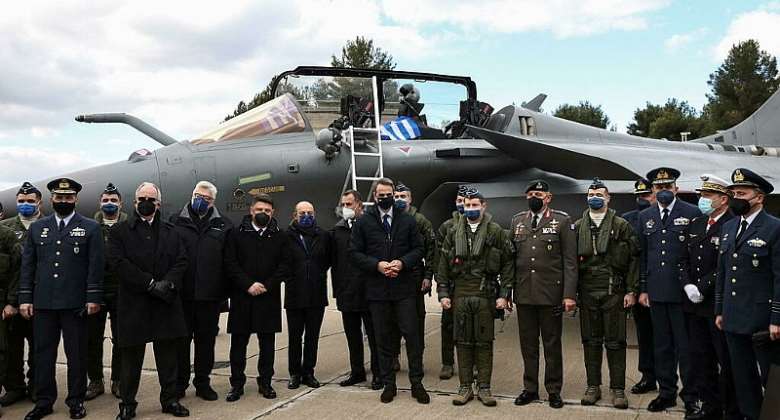 Greece has received six Rafale jets from France in a multi-billion-euro arms deal which Athens and Paris claim boosts the EU's defence capabilities.

The six warplanes landed at Tanagra air base, some 70 kilometres north of Athens, after flying over the Acropolis, escorted by Greek Mirage jets previously purchased from France.

Prime Minister Kyriakos Mitsotakis, who attended the ceremony, said the new additions "make our air force one of the strongest in Europe and the Mediterranean" and bolsters the "flexibility" of Greek diplomacy.

He said there was an "urgent need" to upgrade the Greek air force, which regularly engages in mock dogfights with Turkish jets in Aegean airspace disputed by Ankara.

Greece and France had originally signed a 2.5-billion-euro deal last January for 18 Rafale jets -- 12 used and six new -- as part of a burgeoning arms programme to counter Turkish ambitions.

A Greek airforce  spokesman told French news agency AFP that the aircraft that arrived Wednesday are all second-hand.

A seventh used Rafale was delivered to Greece in July last year.

In September, Greece and France signed a mutual assistance defence pact that includes the purchase by Athens of three Belharra frigates.

The frigates are set to be delivered in 2025 and 2026, for a value of some three billion euros.

Turkey, which has an uneasy history and relationship with its Nato neighbour Greece, has criticised the defence deal as threatening "regional peace and stability".

Mitsotakis in 2020 unveiled Greece's most ambitious arms purchase programme in decades after a dangerous stand-off with Turkey over hydrocarbon resources and naval influence in the waters off their coasts.

A month earlier, Turkey had sent an exploration ship and a small navy flotilla to conduct seismic research in waters which Greece considers its own under post-war treaties.

In contrast to other EU and Nato allies, France strongly backed Greece and Cyprus at the time, sending warships and fighter jets to the eastern Mediterranean.

The 2021 frigate accord came less than two weeks after Paris was left reeling by Australia's cancellation of a contract to buy French submarines in favour of a new defence pact with Britain and the United States.

Macron hailed the deal as a major boost for the EU's defence ambitions.

The French leader has said the frigate sale was not meant to be seen as a threat against Ankara, but a means to jointly ensure security in the Mediterranean as well as in North Africa, the Middle East and the Balkans.

The main Greek opposition left-wing Syriza party, which voted against the French warships deal, has questioned clauses that require Greece to support French military operations in the war-torn Sahel in Africa.

Left-wing opposition parties condemned a tweet from the right-wing ruling New Democracy (ND) party on Tuesday displaying a fighter jet accompanied by the caption "They are coming" and the Greek and French flags.