Attacks on the press: The deadliest countries in 2021 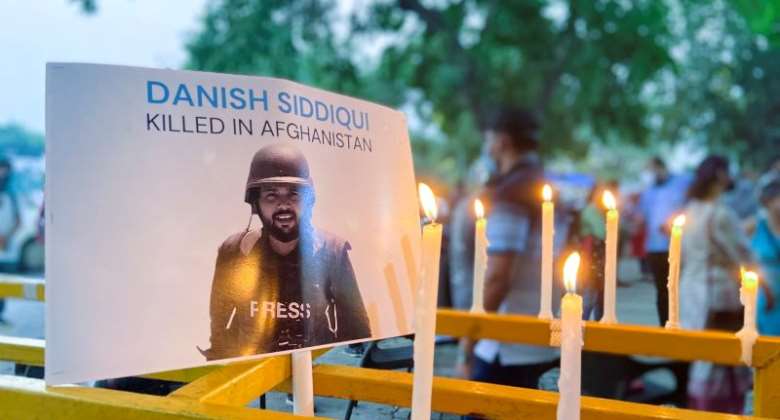 Candles are lit next to a photo of Reuters journalist Danish Siddiqui, who was killed covering a clash between Afghan forces and the Taliban near a border crossing with Pakistan, during a July 17, 2021, vigil in New Delhi, India. According to CPJ research, at least 27 journalists were killed due to their work in 2021. ReutersAnushree Fadnavis

At least 27 journalists were killed due to their work in 2021, with India and Mexico topping the list of countries with the most media worker deaths, according to the Committee to Protect Journalists’ final data for the year. Of the total – which has risen by three since the publication of CPJ’s December 9 report on attacks on the press – 21 were singled out for murder in retaliation for their reporting. Four more were killed while reporting from conflict zones, and two others were killed covering protests or street clashes that turned deadly.

CPJ is still investigating the deaths of 18 other journalists – including six from Mexico –to determine whether their killings were work-related.

While the overall total of journalist deaths dropped from 2020’s number of 32, the number of confirmed retaliatory murders remained roughly the same, suggesting that journalists continue to be seen as targets. The two countries with the highest number of murders – India and Mexico, which registered four and three confirmed murders, respectively – both feature on CPJ’s Global Impunity Index, which spotlights countries where members of the press are singled out for murder and the perpetrators go free.

At least two journalists were killed in Myanmar, amid the military junta’s brutal crackdown on the press that also saw at least 26 journalists imprisoned for their reporting as of December 1, 2021. The two deaths, both in December, represented CPJ’s highest yearly recorded tally for journalist killings in Myanmar since 1999, and the country emerged as the world’s second-worst jailer of journalists after China in CPJ’s 2021 prison census.

Other findings from CPJ’s research on journalist killings include:

Learn more about CPJ’s 2021 data on killed and imprisoned journalists from our interactive map and annual prison census.

CPJ began compiling detailed records on all journalist deaths in 1992. CPJ staff members independently investigate and verify the circumstances behind each death. CPJ considers a case work-related only when its staff is reasonably certain that a journalist was killed in direct reprisal for his or her work; in combat-related crossfire; or while carrying out a dangerous assignment such as covering a protest that turns violent.

If the motives in a killing are unclear, but it is possible that a journalist died in relation to his or her work, CPJ classifies the case as “unconfirmed” and continues to investigate.

CPJ’s list does not include journalists who died of illness or were killed in car or plane accidents unless the crash was caused by hostile action. Other press organizations using different criteria cite different numbers of deaths.

Jennifer Dunham is CPJ’s deputy editorial director. Prior to joining CPJ, she was research director for Freedom House’s Freedom in the World and Freedom of the Press reports.