Glass half full or half empty? How Covid figures can be misleading 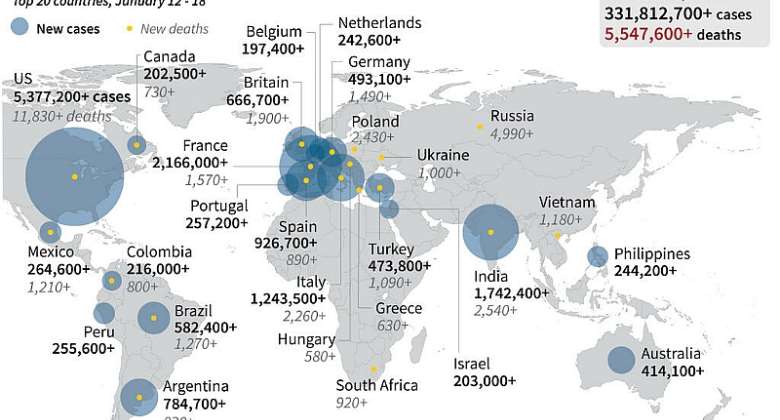 Despite announcing a record number of Covid-19 infections this week, the French government has timidly suggested that the country may nearly be over the worst of the fifth wave.

The World Health Organization, however, says the pandemic is far from over, warning against claims that the fast-spreading Omicron variant is risk-free.

"This pandemic is nowhere near over," WHO chief Tedros Adhanom Ghebreyesus told reporters on Tuesday.

Indications that the surge of Omicron Covid cases may have peaked in some countries "gives hope that the worst of this latest wave is done with," he said,  "but no country is out of the woods yet."

He warned against dismissing the Omicron variant as mild. This version of the coronavirus has spread like wildfire around the globe since it was first detected in southern Africa in November.

In France, the government has begun suggesting the country is seeing light at the end of the tunnel, despite worrying statistics.

France broke a new record on Tuesday with 464,769 new cases in the previous 24-hour period, with an average of over 300,000 a day in the past week. Omicron is responsible for over 90 percent of tested cases.

Despite these facts, the government has tentatively suggested that the fifth wave could be peaking.

"We have reason to be optimistic," government spokesman Gabriel Attal told CNews on Tuesday, citing "the declarations of a certain number of scientists."

There was a 10 percent growth rate of infections over the first week of January compared to 60 percent in the two weeks prior to that, according to France's scientific council, in charge of making recommendations to the government.

Professor Fontanet says "the number of infections will diminish considerably during February and by March it should be lower still."

He attributes this to "the behaviour of the French", who have made a "collective effort" in January, by limiting their contacts.

Fontanet warns however that due to the highly contagious nature of Omicron, "we can expect to see hospitals under pressure throughout the month of February."

With regards to figures in hospitals, Gabriel Attal says the country must remain vigilant, but there has been an improvement. "In the intensive care units, the situation has stabilised, the tension is not increasing," he told the press.

For the week of 10-16 January, there was a 5.7 percent drop in the number of admissions to intensive care, down to 319 people (across 7 days) from 338 people on average the week before.

Experts say this is linked to the characteristics of the Omicron variant, which appears more contagious that Delta, but is producing less serious symptoms and therefore fewer people admitted to intensive care.

According to a small study by the public health agency Santé Publique France released on 6 January, among 338 confirmed cases of the Omicron variant, only five patients were hospitalised and none of them needed intensive care. Among those five cases in hospital, three were not vaccinated.

Official data shows a clear separation between the number of positive cases and hospital admissions, although experts have warned against jumping to conclusions too quickly.

Santé Publique France revealed that "the ratio of hospitalised patients compared to the number of cases with symptoms had strongly decreased in December 2021.

High vaccination levels (currently at 77.6 percent of people over 12 having had two injections) could explain why the hospital admissions are lower that previous waves.

The other possible explanation is that the rate of infection is higher among younger people rather than the elderly who were more acutely affected by the earlier waves. Younger patients are less likely to develop health complications following an infection.

However, this doesn't mean that hospitals are not under strain.

Currently there are 25,000 people sick with Covid in hospital across France, putting pressure on staff and lowering the availability of beds for the treatment of other illnesses.

"An exponential rise in cases, regardless of the severity of the individual variants, leads to inevitable increase in hospitalisations and deaths," WHO emergencies director Michael Ryan told Tuesday's press conference.

"Omicron may be less severe, on average, but the narrative that it is a mild disease is misleading," Tedros agreed.

"Make no mistake: Omicron is causing hospitalisations and deaths, and even the less severe cases are inundating health facilities."

Some pharmaceutical companies are in the process of developing vaccines that better target the Omicron variant, but WHO said that was not necessarily the way out of the crisis.

While the idea of variant-specific vaccines might be enticing, WHO chief scientist Soumya Swaminathan cautioned that since they take months to develop, "the danger is that you will be always trying to play catch-up with the next variant."

A better approach, therefore, she said, might be to try to develop so-called "multivalent vaccines or, ideally, to have a pan-coronavirus vaccine."

In the meantime, WHO stressed that the existing vaccines still do a good job of protecting against developing severe Covid disease, reiterating the importance of ensuring broader, more equitable access to the jabs.

"Vaccines may be less effective at preventing infection and transmission of Omicron than they were for previous variants, but they still are exceptionally good at preventing serious disease and death," Tedros said.