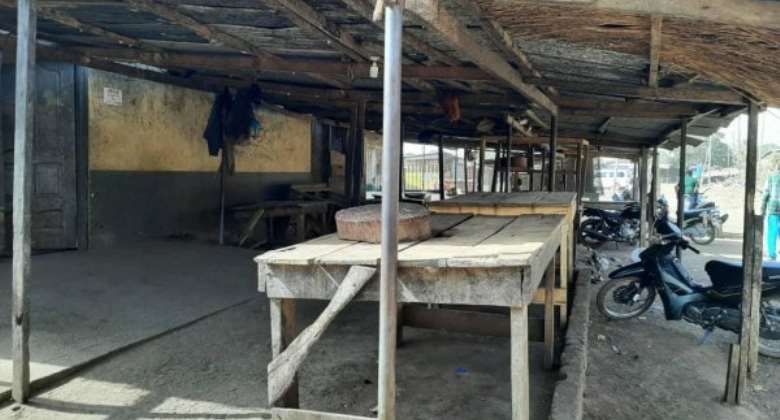 The Bolgatanga Municipal Assembly has locked up the main abattoir in the Municipality after butchers declined to relocate to a newly constructed modern one at Yorogo, a suburb of Bolgatanga.

The newly constructed abattoir, valued at Gh¢1.2 million, started in July 2017 with funding from the World Bank, and was commissioned for use in 2018.

It has modern slaughtering and animal processing facilities, lavatories, offices and a pavilion.

The Ghana News Agency (GNA) observed that the abattoir, which had been locked for two days, had affected the operations of food vendors, restaurants and chops bars among other stakeholders who now resort to chicken and fish to complement their protein needs.

When the Agency visited the old abattoir in Bolgatanga, the butchers were seated in groups around the locked facility chatting with one another.

The action, the public fear, would affect the quality of meat as it may not be properly examined by Veterinary officers to ensure safety.

Mr Tindaazok Koldo, the Chief Butcher at the old Abattoir, who expressed displeasure at the situation, explained that prior to the construction of the new abattoir at Yorogo, the leadership of the Bolgatanga Butchers Association was not consulted.

He said for the past three years there had not been any discussion on the matter and so after completion, he and his colleagues declined to relocate.

Also the new facility could not accommodate the about 400 butchers, saying: “A lot of our members depend on the Abattoir to earn a living, and so if we move there, a good number will be laid off for lack of space. This will add up to the unemployment among the youth in the Region.”

Mr Koldo said there was no livestock market near the new abattoir, which would affect their business.

Mr Rex Asanga, the Bolgatanga Municipal Chief Executive, in an interview with the GNA, confirmed that the Assembly locked up the abattoir after several negotiations to have the butchers relocate.

He said upon completion of the facility, the Assembly held series of meetings with their leadership and they raised concerns about the need for a meat van to transport the meat to town for sale, and also requested for a platform outside the abattoir where they could slaughter some animals as they all could not slaughter in the Abattoir.

The MCE said following the butchers requests, the Assembly signed a Memorandum of Understanding with them to address those concerns, adding that “The Assembly at its own cost, constructed a platform so that some of the animals could be slaughtered on it.

“These were the main things they asked for, and the Assembly has met its side of the bargain, but the butchers refused to relocate. Health wise, the old abattoir is not in the best of conditions,” he said.

The MCE said after the December 15, 2021, deadline to relocate, the Assembly further engaged their leadership and extended the date to the first week of January, 2022.

“But they did not move, so the Municipal Security Council held a meeting and invited them to discuss a date for their movement. They refused to honour the invitation, and so we wrote to them to relocate by January 18, 2022,” Mr Asanga said.

“But they think that we should relocate all of them at the same time. That will not be fair to the cattle traders. They also have their issues.”