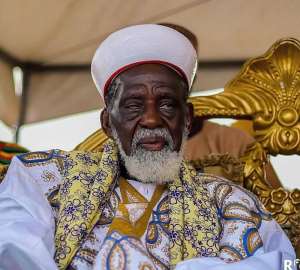 The Chief Imam, through his Spokesperson Sheikh Armiyawo Shaibu, described the act as unfortunate, which did not conform to the teachings of Islam and urged Muslim youth to uphold the principle of respect for the sanctity of human blood and the sacredness of human life.

The National Chief Imam said this when the Conference of Regional Chief Imams of Ghana, consisting of imams from all the 16 regions across the country, paid a courtesy call to officially introduce themselves to him.

He said the Islamic Religion promoted all that was good and righteous and advantageous and abhored anything that was evil and destructive to human life, adding that the incident was unacceptable.

The National Chief Imam encouraged all Imams to engage the youth on peaceful co-existence every Friday in their sermons.

He advised young people to eschew violence, idleness and not allow themselves to be used by people to foment trouble, saying “What happened yesterday was an eyesore and we hope that we will never see similar thing happening again.”

The Ghana Police have so far arrested seven persons in connection with the Nima violent clash with two of the suspects currently on admission at hospitals under Police guard.

One injured victim identified as Appiah is on admission at the 37 Military Hospital responding to treatment.

The Police said the clash occurred after leaders of the rival groups had agreed to meet publicly to iron out their differences.