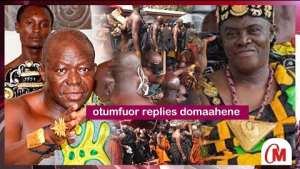 Osaegyefo Nana Agyemang Badu II (PhD), the paramount chief of Dormaa Traditional Area in the Brong region, has the penchant for denigrating the person of Otumfuo Osei Tutu II, the King or the traditional overlord of Asanteman. He also rubbishes the historic bravery of the Ashantis with its concomitant conquests of their enemies.

I recently published a rebuttal against his distorted narratives that the Dormaa people once fought and defeated the Ashantis. The time he claims his people defeated the Ashantis, there was nothing known or formed as the Asante Confederacy or Asante Kingdom. Again, there existed no Kumasi but Kwamang and no Kumawu but Apemso.

He gave a totally false history concerning the origins of Kumasi and Kumawu contrary to the known and accepted planting of two “Kum” trees; one in Kwamang and the other in Apemso, by the renowned fetish priest (Okomfo) Anokye. This was done when the different states coming together to form a union desired to have one leader and a capital for their union of chiefs and states.

In a nutshell, it was agreed that between the two towns where the tree flourished would become the capital with its chief becoming the head of the Union of States called Asante Confederacy. Fortunately or unfortunately, that of Kwamang flourished while that of Apemso withered hence Kwamang becoming “Kum no ase” (under the Kum tree) – Kumasi, while Apemso became “Kum no a wu” (Kum is dead) – Kumawu.

However, Dormaahene associates Kumasi with “axe”, alleging that the people of then Kwamang, not the current one near Nsuta, were defeated by the Dormaas and were obliged to hew trees for the Dormaas for their firewood.

What a complete distortion of history by this young educated paramount chief who doubles as a High Court judge in Accra.

The rubbing of shoulders with Asantehene Otumfuo Osei Tutu II by Dormaahene could be down to the fact that Osaegyefo Nana Agyemang Badu II feels he is more educated and holds a highly respected public office in Ghana in addition to his traditional position than Asantehene Otumfuo Osei Tutu II. Therefore, in education wise, Asantehene is not his co-equal hence his persistent insolence towards him despite the fact traditionally Asantehene is more elevated and respected than Dormaahene.

They are both alleged to be strong NDC members or sympathisers so their banter could have underlying political reasons unknown to the public.

In Asantehene’s rebuttal to Dormaahene, he made a gospel truth statement. He that all that is needed is the speaking of the truth to help move the country and the people forward rather than telling lies impregnated with animosity, tension and the potential to cause unnecessary problems for all. He said, our forefathers went to war for reasons bordering on protecting their people and their wellbeing. However, today, we cannot resort to war to better the circumstances of our people but only to be truthful in whatever we do, to move the people and the country forward.

I was glad to hear Otumfuo Osei Tutu II make that statement during the first meeting of Asanteman Council this year. It was captured on recorded video by Oheneba Media, the probably bootlicking social media always siding with Asantehene and the chiefs irrespective of the case and circumstances.

If Otumfuo Osei Tutu II believes in the truth and wants to tell and live by the truth to help develop Ghana and the people therein, then I have the following to tell or ask him.

1. Does he know that he has absolutely no right, either constitutional or traditional, to meddle in the chieftaincy affairs of Kumawu, let alone, impose a person of his choice on Kumawu as their paramount chief? If yes, why did he insist he has the right to choose any to become Kumawuhene?

3. Does he know that the truth is all land in Ashanti does not belong to him and that all the various chiefs occupying the lands in their divisions are not caretakers of the land in his behalf? If he does not know, he had better check to read my published rebuttal immediately following his false claim.

4. Does he know that the truth is there are stool, family and government lands in Ashanti region without all land in Ashanti belonging to him as he has deliberately but erroneously asserted in public before a mammoth audience during the 70thanniversary of the opening of the Kwame Nkrumah University of Science and Technology (KNUST)? If he does not know, he had better check my archived publications on the Ghana online news portals.

5. Does he know that he is illegally or criminally availing himself of Kumawu stool lands contrary to standing procedures, custom and traditions of Kumawu and Ashanti? If he does not, he had better check with his elders and his Manhyia archives to learn about the demands made by Barima Tweneboa Kodua I, before offering himself as a sacrificial lamb to save the Asante Kingdom from defeat under the hands of the most fearful and callous Denkyira King, Nana Ntim Gyakari.

6. Does he know that influencing a judge to twist justice in his favour contrary to the availability, credibility, permissibility and acceptability of the evidence is wrong and against the truth he now aspires to tell? If yes, why does he pride himself in having judges in Ghana to reverse verdicts in his favour at all times?

7. Is the Kumawu Ankaase royal family of same matrilineal descent as Barima Tweneboa Kodua I, the originator of the Kumawu Kodua Stool hence are actually the Ananangya royals as claimed by Asantehene Otumfuo Osei Tutu II? Could he not have claimed so for his selfish and parochial interest?

I can keep asking questions on end but they may not be very necessary since if he really means to live by the truth and pursue the truth at all times, the little said here will be more than sufficient to guide and keep him to the right path. He may be guilty of all the questions posed above. No wonder Dormaahene is peeved that he is arrogating undue powers to himself to the detriment of Ghana and the citizenry.

Let both chiefs resolve their differences since washing their dirty linen in public will not augur well for them and their respective subjects.

Dormaahene should stop distorting Asante history. Asantehene should cease portraying himself as the most powerful person in Ghana with the power to do whatever he likes whenever he wants.

The truth will always out and shall prevail regardless of the hurdles littered in its path.

Kumawuman shall rise! Kumawuman shall be free! And, the differences between the two feuding chiefs, Otumfuo Osei Tutu II and Osaegyefo Nana Agyemang Badu II, shall be resolved amicably.