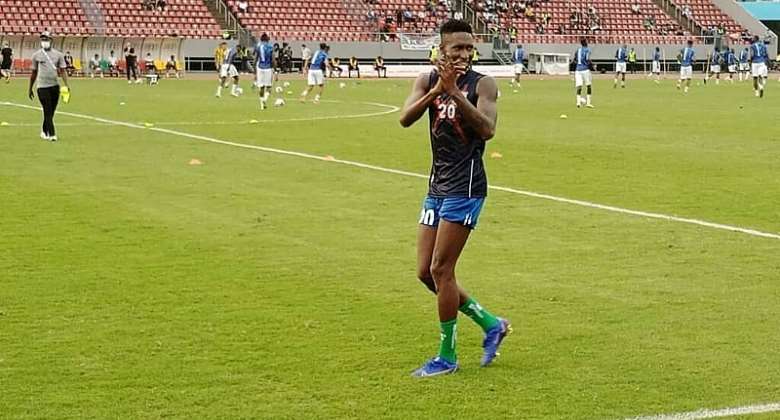 Gambia top striker Babucarr Steve Trawally has left the Scorpions' camp in Buea, Cameroon, in the midst of the Africa Cup of Nations tournament (AFCON) claiming an ankle injury, the Gambia Football Federation announced in a statement on Tuesday.

“He was included in both match day squads as we begin our campaign with a win against Mauritania and Mali respectively,” the statement said, adding he was not at practice on Monday.

“The forward claimed an ankle injury and did not train yesterday. He has returned to his club this morning for urgent treatment,” it said, referring to Ajman Sports in UAE.

Ajman Sports had written to Coach Tom Saintfiet on Monday, requesting his return because of an injury, he told RFI's Africa Calling podcast.

"We never had any issues with him, nor did he have issues with other players," said Saintfiet.

The former Al-Shabab and Guizhou Hengfeng playmaker was among coach Saintfeit's final 28-man squad but did not play in the continental showpiece before he left the team's camp.

Trawally posted on his official social media accounts that he had always wished to represent the country in big tournaments like AFCON but injuries made it impossible to fulfil this wish.

“Unfortunately, I haven't gotten the best treatments which warranted my club Ajman to request from the Gambia Football Federation and national team officials to send me back so I could get proper treatment,” he said on social media, referring to the injury he had going into AFCON.

The statement from the Federation that the player “claimed to be injured” left many in doubt. Popular football pundit Sang Mendy said the statement on Trawally's injury should have come from the team doctors, not the footballer himself.

''If you look at the statement from the player, it's like he was injured well before coming to the tournament,” said Mendy.

“But if you look at the statement from the Federation, it's saying the contrary, it said the player claimed to be injured,” he added, saying that he hoped it would not impact the players.

“This is the time the team needs to focus more,” he said.

There has been no official confirmation from the team doctors in Buea about the injury, and the head of GFF communication said there will be no further comment in the issue.

Scorpions fans dismayed
Many football fans are disappointed by his move.
Scorpions fan Lamin Sanneh told Africa Calling he is disappointed that with all the positivity coming from the squad, on their first Cup of Nations tournament, Babucarr Steve Trawally didn't want to stay.

“Steve really played a crucial part in qualifying the Scorpions for our maiden AFCON, and it's a shame that he will not realise his dream with the team in Cameroon. I don't know what his reasons are, but as a fan I'm disappointed,” he said.

Another fan, Ismaila Jatta said Trawally's excuse of being injured is bizarre and that if he had had playing time he wouldn't have pulled out.

“I'm definitely not ruling out the possibility of him being injured,” said Jatta.

“But the point is, you can't be injured and still manage to train everyday while also making it to the bench twice, but immediately pull out of the team after not getting game time. He pulled out because of his ego,” he added.

Despite the controversy, some supportive fans wished Trawally well.

“Steve is one of the best players we have on the team, so hearing that he's injured and won't be able to play AFCON is indeed bad news for us, so we pray for him to recover soon," said fan Lamin Manneh.