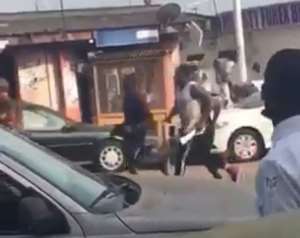 Th Police have arrested seven persons over the shoot-out in Nima on Tuesday during a clash between two rival gangs.

Five of the suspects are in police custody while two have been hospitalised under police guard.

Police are also on the search for the leaders of the two gangs known as Kumordzi and Bombon.

One injured victim known as Appiah, is receiving treatment at 37 Military Hospital.

“Nima witnessed mass violence around 3:30 pm yesterday [Tuesday], and the Police quickly intervened. The violence spread across some sections of Nima and we managed to stabilise the situation.”

“7 persons have been arrested. 5 are presently here with us, and the other two are on admission at the Police hospital.”

He further indicated that the Police is actively working to clamp down on all criminals within Nima and its environs.

The Police Service posted a video on its Facebook page showing a group of men holding machetes moving along a street in Nima, as some fired gunshots in the open.

The Police in its social media post also said it had strongly intervened and contained the violence.