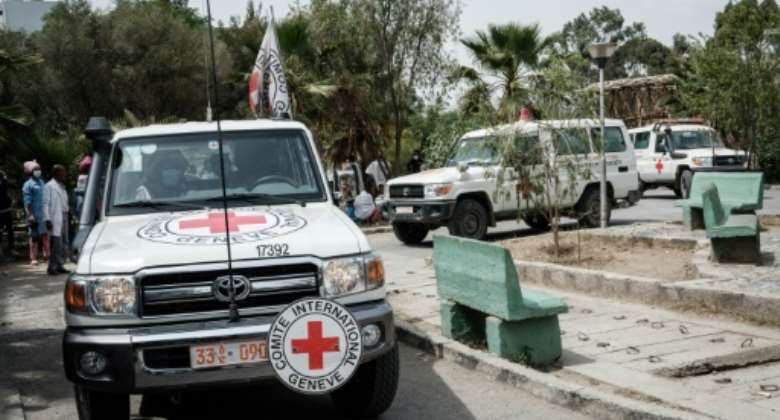 The ICRC says it is 'profoundly concerned' about the shortage of medical supplies. By Yasuyoshi CHIBA AFP

Hospitals elsewhere in the country's war-battered north were being forced to shut, the ICRC said, and unable to keep patients alive without medicines, electricity or water.

Thousands of people have died in 14 months of fighting in Ethiopia and millions are suffering from a critical shortage of food and medical essentials in conflict-afflicted regions.

The United Nations says a de facto blockade on aid reaching rebel-controlled Tigray is creating a humanitarian crisis in a region of seven million people.

The ICRC said it was "profoundly concerned" about the shortages of medical supplies, adding that doctors were forced to make impossible decisions on their rounds.

"In Tigray, single-use items such as gloves, surgical materials and even chest drains are being washed and reused, increasing the risk of infections," Apollo Barasa, ICRC health coordinator in Ethiopia, said in a statement.

"In some places, doctors have replaced disinfectant by salt to clean wounds. Patients are receiving expired medications, oxygen plants are not working anymore, and some health facilities cannot provide routine vaccines."

In the neighbouring Amhara region, hospitals had closed because of a lack of medicines.

"People with chronic diseases are dying every day and women are giving birth at home as health facilities are not functional and often without electricity or water," Micha Wedekind, who heads the ICRC's response in Amhara and Afar, said in a statement.

Last week, the head of the UN's World Health Organization (WHO) described conditions in Tigray as "hell" and said the government was preventing medicines and other life-saving aid from reaching locals.

Addis Ababa rebuked Tedros Adhanom Ghebreyesus for his remarks, accusing the high-profile Tigrayan of endorsing the rebels fighting the Ethiopian army and its allies.

The UN's World Food Programme (WFP) on Friday warned that its operations in northern Ethiopia "were grinding to a halt" and appealed for impositions on aid deliveries to be lifted.

Prime Minister Abiy Ahmed ordered troops into Tigray in November 2020 in response to what he called attacks on army camps by the region's former rulers, the Tigray People's Liberation Front (TPLF).

He promised a swift campaign but more than a year later the war drags on and civilian casualties mount.

The UN said last week that at least 108 civilians had been killed in air strikes over Tigray this year alone.