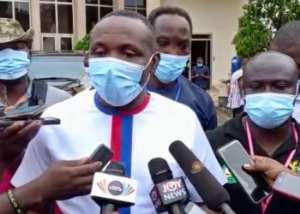 The General Secretary of the governing New Patriotic Party (NPP), John Boadu, says the party will come out victorious in the 2020 Techiman South Parliamentary election petition.

He said this after lawyers of NPP’s Martin Adjei-Mensah Korsah concluded their cross examination of the NDC's General Secretary, Johnson Asiedu Nketiah on Monday.

Speaking to Citi News, the NPP General Secretary also accused the NDC of peddling falsehood after the elections.

“We believe strongly that after the trial, the New Patriotic Party's Martin Adjei-Mensah Korsah will come out victorious. We urge Ghanaians not to give heed to the NDC, who are going around declaring otherwise as they are notorious for peddling falsehoods.”

“It is the character of the NDC to be mentioning different figures, and spreading falsehood during elections, deceiving Election observers.”

The National Democratic Congress (NDC) is challenging the election of the New Patriotic Party's Martin Adjei-Mensah Korsah as Member of Parliament for Techiman South.