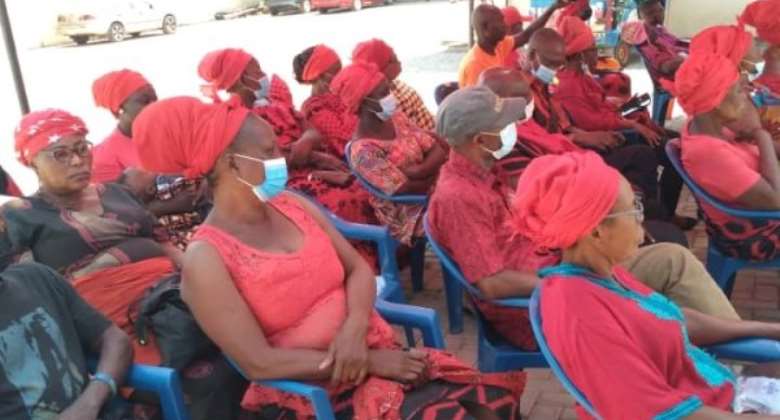 The Youth and Asafo group of Asogli State in the Volta Region have called on the Zongo community in the State to allow peace and unity to prevail.

"We the Asogli Youth and Asafo have noted with grave concerns several attempts by some self-seeking individuals and groups to foment trouble in the once peaceful Zongo Community in Ghana”.

At a press conference in Ho, Togbe Adase V, Asafofia of Ho-Ahoe, said the recent impasse in the Zongo Community, had the tendency of affecting the peace and tranquility of the entire Ho Township, Asogli Traditional Area and the Volta Region, if not properly addressed.

"We wish to caution any group or individuals engaging in making unsavory remarks about any Chief of the Asogli State. Such attacks will be seen as an attack on the entire Asogli State and shall incur our wrath henceforth," he said.

He said issues disturbing the Zongo Community, which had been brought to the attention of the Asogli State Council had been dealt with like any other concerns in the jurisdiction with participation of the major stakeholders from the various tribes.

“We therefore find it intriguing and distasteful for a group of people who held a press conference on November 19, 2021 and whose statement was signed by one Alhasan Suradj and Suhailu Mohammed Kidza, purporting to be acting Deputy Regional Muslim Youth Secretary and youth leader.

“The said statement claimed various fabrications against the Asogli State Council and office of the National Chief Imam, The Traditional father of the New Zongo, Togbe Adzima IV, the Sariki Zongo and some families were also singled out for scathing attacks and aspersions."

“We must confess that there were initial hitches with the selection and enskinement of the current Zabarama Chief, Sariki Ademu Hamani Dagadu as successor to his late father Sariki Alhaji Shaibu Hamani. But thankfully, the panel of Asogli State Council Chiefs addressed the impasse through a series of consultation and investigation.

“The Zabarama tribesmen appeared before the panel of Asogli Chiefs including the then reagent Baba Hamani. The panel came out with the finding that the current occupant was duly qualified to be enskined.

“Sariki Ademu Hamani Dagadu was therefore enskined and publicly introduced to Agbogbomefia Togbe Afede XIV at a well-attended programme that was graced by all 16 Regional Zabarama Chiefs and the National leadership at the forecourt of the Asogli State Palace.

“Therefore it comes as a surprise as to why any individual or group of persons who were hitherto part of this peaceful process will rise up today to question the propriety of Sariki Ademu Hamani Dagadu, as the Volta Regional Zabarama Chief. This can only be for mischievous and with ulterior motives.”

He said Togbe Adzima IV was currently the only mandated Chief by the Asogli State Council as the link or traditional father between the Asogli State and the Ho New Zongo, and therefore, must be accorded with the due respect.

“The point must be made clear that it is the sole preserve of the Traditional authority to appoint whoever it deems fit to play this important role. It does not lie in the mouth of any individual or a group of people to order the Agbogbomefia Togbe Afede XIV, to do their wishes. Togbe Adzima IV, who plays this vital role of representing the Asogli State, must be given the due respect.

“We appeal to Agbogbomefia, Togbe Afede XIV to as a matter of urgency ensure the dissolution of all traditional fatherhood between any other Asogli Chief and the Zongo tribes.

“The only traditionally mandated father to the New Zongo in Ho must remain, in the meantime, Togbe Adzima IV, to restore peace and unity in Zongo.

"We also wish to call on the security agencies to begin to apply the needed sanctions to any group of persons or individuals whose main objective is to cause trouble in the Ho Township.”