One out of four marriages registered at AMA in 2021 collapsed due to infidelity, ill treatment — PRO 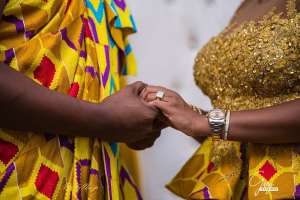 A total of 79 customary marriages were dissolved at the Accra Metropolitan Assembly (AMA) in 2021, according to data from the Assembly.

The Assembly, in 2021, registered a total of 345 customary marriages, 79 of, which were dissolved, indicating that, one out of four of the marriages registered collapsed.

They were engagements and Islamic marriages.

Common causes of the collapse of the marriages were infidelity, ill treatment, and child non-maintenance.

Mr Gilbert Nii Ankrah, Head of Public Affairs, AMA, told the Ghana News Agency, in an interview on Monday that, the divorce figures for 2020 were lower as compared to that of 2021.

“In 2020, because of the outbreak of the COVID-19 pandemic, the Assembly did not record any significant numbers, but all I can say is that the numbers increased in 2021 as compared to that of 2020,” he said.

Mr Ankrah said in 2021, out of a total of 5403 ordinance marriages registered, only 1776 were conducted by the Assembly.

On the issue of divorce, Mr Ankrah explained that because ordinance marriage had to do with the court and was legally inclined, the Assembly did not have the power to get involved in the dissolution process of those marriages.

“The divorce processes of those marriages are strictly restricted to the court.”

He urged the public to go through the right procedures to register any form of marriage with the Assembly to avoid disappointments.

Though marriages could be registered with other Assemblies, the AMA, he said, had “a unique brand”, and that marriages registered and conducted with the Assembly “has some form of authority.”

Mr Ankrah said: “With the ordinance marriage, after the marriage is registered with the Assembly, the information is published for a period of 21 days to allow for any objects or otherwise after, which the marriage can either be conducted by the Assembly or any church certified to do so.”