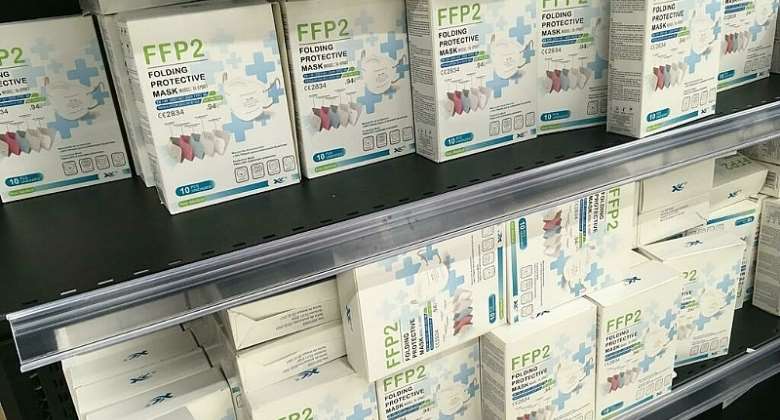 Anti-Covid face masks are omnipresent in French supermarkets. Like self-tests, thermometers and hand gels, they are predominantly produced in China. RFI takes a closer look at how Beijing has turned the global pandemic to its advantage.

Almost every supermarket in the Paris region displays racks of Covid-19-related merchandise made in China.

"They sell out as soon as they arrive," says one sales person.

A box of black disposable surgical masks is for sale in a Paris supermarket for less than 4 euros. The masks are manufactured by Xiantao Zhuobo Industrial, based in Hubei province, capital Wuhan, the city where the virus first surfaced.

Another box with 10 FFP2 Folding Protective Masks is manufactured by the Zhejiang Xieli Science and Technology Co. Ltd, which was originally a home decoration and stationary company. Its website shows stickers, notebooks, greeting cards and gift books.

Previously, most of China's top producers of face masks were foreign companies operating as joint-ventures with local partners. The top five were 3M (US,) Cleancool (China,) Honeywell (US,) Uvex (Germany) and Kowa (Japan.)

But when, after the Covid-19 outbreak, domestic demand for face masks exploded, domestic producers where quick to start manufacturing them.

During the first months of the pandemic, from January to March 2020, authorities in Beijing sought desperately to get as many masks from abroad as possible, contributing to severe shortages worldwide.

According to a press release from truck manufacturer Build Your Dream (BYD) in March, 2020, overseas branches of the company (which is represented in the US, Europe and Africa) "coordinated foreign resources to purchase N95 masks and other epidemic prevention material ... and successively donated them to the medical staff fighting on the front line against the epidemic."

And Bloomberg suggested that Chinese state-run companies systematically engaged in the mass buying of masks abroad, reporting that oil explorer Petrochina, one of China's biggest companies, "directed employees in 20 countries to buy face masks and send them home to help combat the virus."

But then things changed. A study by medical website VCbeat.top published during the early stages of the pandemic, shows that already in February 2020, non-specialised companies switched to the production of masks.

BYD announced it was starting its own mass-production effort, while SAIC-GM-Wuling, a car joint-venture between General Motors and Chinese partners and iPhone producer Foxconn also went into producing face masks as a sideline.

On 11 May 2020, state television CGTN reported that oil producer Sinopec was building up the "world's largest mask material production base" while other companies like cell phone manufacturer Changying Precision, diaper maker Daddy Baby, Tuoye Robot jumped on the bandwagon and others started production abroad, like smartphone maker Oppo which had its India outlet producing masks for its local staff.

Eventually, China swept the initial shortages under the table and its powerful propaganda machine started highlighting examples of how planeloads of face masks, respirators and other Covid-19 related material reached countries where the pandemic was raging.

China's propaganda machine showed the triumphant arrival of pallets packed with face masks being received by happy crowds in countries from Serbia to Rwanda.

But not everybody was enthusiastic.
The Dutch government had to recall 600,000 FFP2 masks after they were tested and appeared to fail hygiene standards.

Australian Border police confiscated 800,000 face masks that were “counterfeit or otherwise faulty” according to a report by the Australian Broadcasting Corporation.

Spain and Turkey had to send back large shipments as well. China rejected the complaints, saying they were "politically motivated."

The EU high representative for foreign policy, Josep Borrell commented on his blog saying that there was a “geopolitical component” to the Covid-19 crisis, including a “struggle for influence through the 'politics of generosity'.”

But where are the local manufacturers?
French companies did, belatedly, start to answer the increasing demand for face masks and other Covid-related medical equipment, and tried to counter the flood coming from China.

Diagnostic tool manufacturer NG Biotech in Bretagne finally accelerated its production of auto-tests and massively increased its work force when the Omicron variant hit France in December 2021. Le Masque Français, a company based in the Paris region, stepped up production of face masks.

How long will people, who have to change face masks several times a day, be willing to pay for a local product when the alternative made in China sells for a quarter of the price?