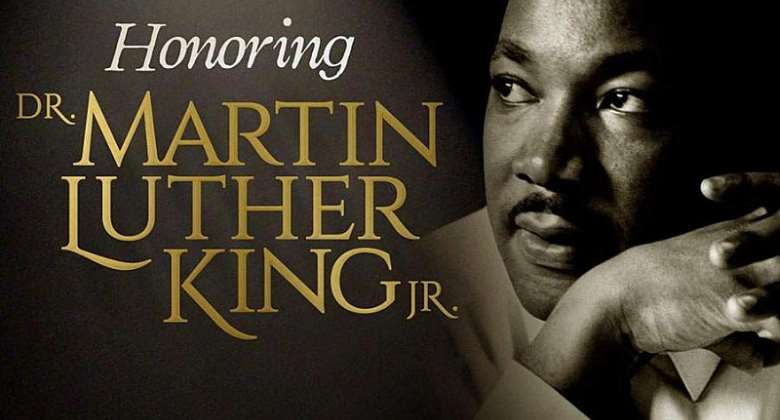 Today, January 17, 2022, is being observed and celebrated as a national holiday across the United States of America — in worthy respect of a great man.

The simple but substantial question remains: why does Martin Luther King, Jr matter?

As a continental African in America, as a recent immigrant and citizen of the United States who has been blessed by the graciousness, business opportunities, global possibilities and hospitality of Americans, I have cause to be thankful for benefiting from the vision, personal sacrifice and peaceful soldiering of the late Martin Luther King.

He will always be remembered as the champion for a society which fosters harmony and acceptance of all our unique talents, ethnic and racial origins.

He fought hard for the right of African-Americans to vote In American elections; secured in 1964.

On a broader scale, MLK stood for the rights of all people to the civic rights to vote and to live a better life….

That’s how on July 15, 1994, I visited the Martin Luther King Center in Atlanta, Georgia—for the first time —- as a member of a committee of some African ambassadors, African-American professionals and a handful of continental Africans assembled by the late Rev. Leon Sullivan, longtime advocate for equal rights for South African and American Blacks, to plan aspects of the 1995 African and African-American summit in Dakar, Senegal.

As we honor him during this week of the post-humous celebration of his birthday, I believe that the existing global alliance of all humankind, representing the full tapestry of ethnic/racial origins as Caucasians, Blacks, Jews, Asians, and a multitude of other backgrounds should continue to advance Dr. King's vision and efforts.

This is very important because of the codes and road blocks being enacted and put in place to make it more difficult to cast votes during elections.

Those who uphold Dr. King’s “dream” should do more by utilizing technological tools, networking, boosting religious and communal structures to fight forms of sophisticated discriminations which seek to minimize full participation and technically disenfranchise people from voting freely in 2023-2024!

Dr. King saw the iniquities of his time, but it did not stop him from rising to the challenge of the day and charting a moral, progressive, inclusive and visionary road map for the future.

Amidst all the technological revolution in the United States and other dizzying changes in the ways we all live our lives as apart of an inter-connected world, the challenges and burden of overcoming the raw emanations of racial bigotry, gender hostility and religious hatreds have followed mankind into every new “civilization”….

To be sure, very significant progress has been made on almost all fronts of human endeavor.

Like I have stated on this and other public policy platforms in Africa and here in the United States, we should remember that although King and his colleagues fought and died to enhance the cause of racial harmony and peaceful resolution of conflicts, there are other forms of iniquities which diminish our collective dignity as God's children.

Also, in the course of political fights in Washington DC and other places, we have, sometimes, listened to impassioned partisan drivel that Dr. King fought for a "color-blind society." No!

Permit me to note that from my researching King's view on this issue and having discussed the same question with one of his sons, Martin Luther King III, the claim that the late but revered King worked and died for the emergence of a "color-blind society" amounts to nothing more than grandiose distortion and arrant nonsense.

Practically, it is sociological misleading since multi-ethnic and multi-racial societies will have their "color" components.

Therefore, the ideologically misleading mantra pretending to establish a "color-blind society" merely serves as a wedge issue and fund-raising code for contortionists of King's vision and works.

I think Dr. King specifically sought the respect and recognition of our diversity, backgrounds and our racial origins. He specifically demanded that we neither be judged nor discriminated against because of the color of our skin.

He beseeched that we rather be judged by the content of our character.

Dr. Chido Nwangwu, the Founder of USAfrica multimedia networks and public policy organization since 1992 in Houston, established the first African-owned, U.S-based newspaper published on the Internet USAfricaonline.com. He served as adviser on Africa business to ex-Mayor of Houston, Dr. Lee P. Brown. He is the author of the summer 2022 book, MLK, Mandela & Achebe: Power, Leadership and Identity. MLKMandelaAchebe.com