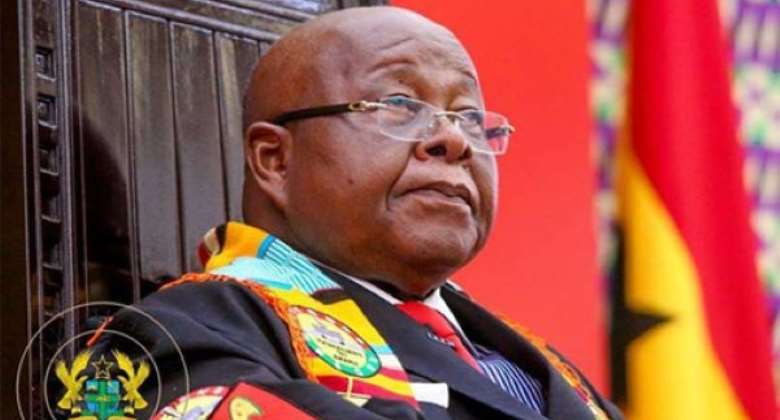 Immediate past Speaker of Parliament, Prof Mike Oquaye, has denied ever being given military bodyguards while in office.

In a signed statement issued on Monday, 17 January 2022, Prof Oquaye said claims to that effect were “palpable” falsehood and should be disregarded.

“I was never offered military protection nor did I request for any”.

“Indeed, I had only three policemen to move with me and provide security at all material times”.

“This information can be easily verified by anyone who cares for the truth at the office of the Clerk to Parliament at any given time,” his statement read.

It follows claims by Sagnarigu MP A.B.A. Fuseini that Mr Bagbin is not the first Speaker to enjoy military protection.

According to him, Prof Oquaye enjoyed it, too. 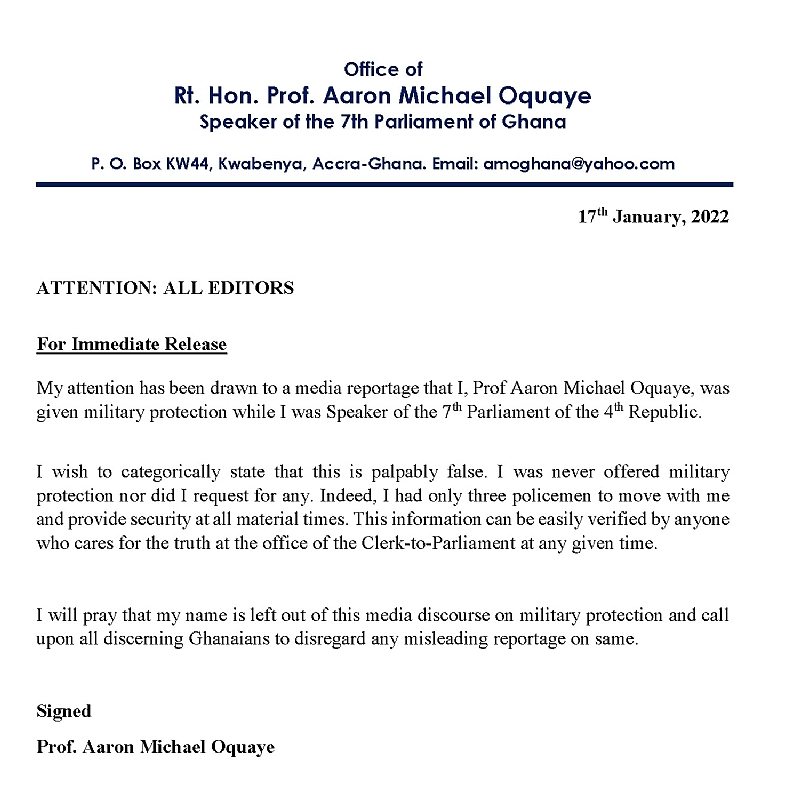 “What was the initial decision to beef up the [security] with the military? Even Speaker Oquaye enjoyed military protection as well; he did. Let them not project this as if this is the first time, it’s not”.

Mr Fuseini also said at a time that the government has stripped Mr Bagbin of his military bodyguards, there are still soldiers who carry things for some ministers of state.

The Ghana Armed Forces withdrew the four military personnel detailed to the office of the Speaker with the reason that they were improperly assigned.

A letter from the Chief of Staff of the Ghana Armed Forces, NP Andoh, addressed to the Speaker, identified the four military men as WO1 Jafaru Bunwura, WOII Apugiba Awine David, S/Sgt Agbley Prosper and Sgt. Bonney Prince.

They have been protecting the Speaker since January 2021.

The minority in parliament is, however, furious about the development.

Condemning the move, Mr Fuseini said the government is up to no good.

“When they have a sinister motive and others, we can read into it and that is what they are trying to do”, he observed.

“But let them be aware that no force can intimidate the right honourable Speaker or we, the members of the NDC on that side. No force. Let them get it right. No force can petrify us or intimidate us and cow us into submission”, he warned.

“It will never happen. So, let us make it clear”, he stressed.

Mr Fuseini advised the army to shield itself from political interference so as to safeguard its enviable world reputation.

“I’ve always said that our military has one of the most professional standards; they should not allow this government to compromise them and use them to do their dirty work. They should stand up”, he urged.

“They are up to something”, he alleged in connection with the development, adding: “It is a signal to be sent to the Speaker that we can take out some of your cover and your security will be more compromised and you have to think twice”.

The opposition lawmaker believes the government is orchestrating the move to force the Speaker to play ball as far as the controversial e-levy is concerned.

“Look at the timing; why are they doing it now? They are doing it because it’s at this time that this e-levy has become a problem for this government. We are not kids in this country and we are all political animals and we know – we can tell a ripe corn by its look”.