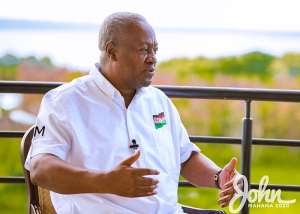 He said the National Democratic Congress (NDC) of which he is yet to lead as flagbearer will increase its seats in Parliament from 137 to 165 in the 2024 elections.

The former President said this when he expressed gratitude to the people of the Gambaga-Nalerigu Constituency in the North East Region for voting for the National Democratic Congress in the 2020 elections.

“Indeed, you are one of the constituencies that have helped NDC to continue to have a hold in parliament”, the 2020 flagbearer of the NDC said on 17 January 2022 during the final funeral rites of Alhaji Ligbi Adam Midjida, a very prominent man in the Gambaga area.

Secondly, Mr Mahama said he was in the area because of Hassan Midjida, who is a friend and whose father was the late Alhaji Midjida.

Lastly, he said he was there to thank the people for voting for his party, NDC.