RFI reporter among those brutally attacked by police at Tunisian protest 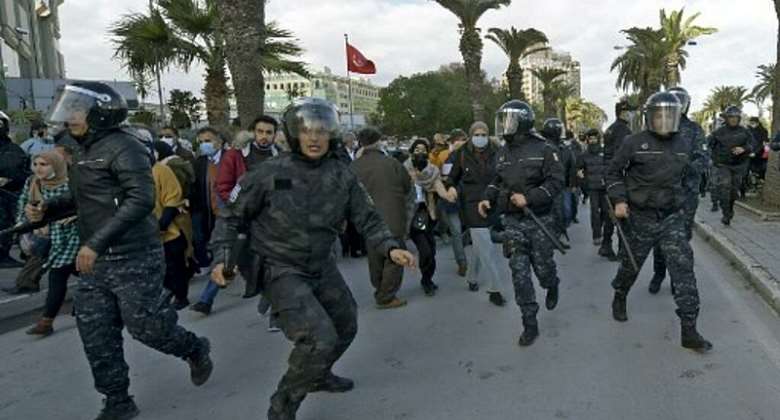 RFI journalist Mathieu Galtier was among those attacked by uniformed police at a banned protest in the Tunisian capital on Friday. More than twenty non-governmental organisations have condemned the violence, describing the behaviour of the police as "barbaric repression".

Officers are accused of having acted in a "repressive" way, subjecting protestors and journalists to "barbaric" attacks.

Mathieu Galtier, who works for RFI, the French daily paper Libération, and the monthly magazine Jeune Afrique, was clearly identified as a journalist, wearing a special jacket with his status indicated in both French and Arabic.

According to Libération, Mathieu Galtier was using his telephone to film the arrest of a demonstrator when he was himself set upon by an officer in uniform.

Galtier was dragged between two police vehicles by several officers, and then subjected to a barrage of kicks and blows. He was sprayed with tear gas.

"Then they took my phone and my press card and they left me lying there," he said.

He was helped by a fire brigade medical team. His phone and professional identification have since been returned, without the memory card on which images are stored.

The doctor who examined Mathieu Galtier's injuries confirmed multiple bruising and a 10 centimetre graze on the reporter's forehead.

Several other journalists were beaten by the police. The Tunisian National Union of Journalists says that more than 20 were either attacked or otherwise prevented from working.

RFI, Libération and the Association of Foreign Correspondents in North Africa (NAFCC) have condemned the attacks and called for an immediate official enquiry.

The protesters massed despite a ban on gatherings imposed last Thursday as coronavirus cases surge in the north African country. Saied's opponents say the restrictions have nothing to do with the health situation and are politically motivated.

Protesters gathered on Mohamed V Avenue, but were prevented from reaching Habib Bourguiba Avenue, epicentre of the protests which toppled Ben Ali in 2011.

Some demonstrators broke through a police cordon before baton charges, tear gas and water cannons pushed them back.

There were dozens of arrests.
"It's the most violent intervention by security forces we've seen in the past year, both in terms of the methods used and the number of arrests," said Fethi Jarray, president of an independent anti-torture body.