Senyo Hosi calls for depoliticisation of all security services 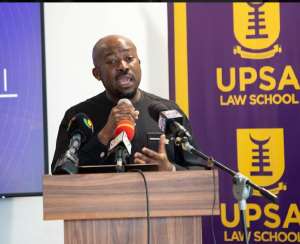 Economic policy analyst, Mr. Senyo Hosi wants the depoliticisation of all security services in his call for reforms to save the 1992 Constitution from its impending death.

The Chief Executive Officer of the Ghana Chamber of Bulk Oil Distributors (CBOD) said any nomination by the President for positions in the security agencies should be subject to a two thirds approval from parliament.

This, according to him, is a sure way of curbing potential partisan activism by officers and will cure the age-old culture of protocol recruitment.

“Similar to the above process, the president’s nominees should be subject to a two thirds approval from parliament. This too shall significantly mitigate potential partisan activism by the respective officers and culture of protocol placements,” Mr. Senyo Hosi said while delivering a Constitution Day Lecture on Friday, January 14, 2022, at UPSA.

He continued, “The Finite and secure tenures of say four years, may also be required to ward off executive interferences to their allegiance to the constitution. Their tenor should straddle two administrations.

“Some may argue that the security services are too sensitive and must be left to the President alone. I can relate to that concern, but allegiance is sworn to the constitution and commitment must be to the people of Ghana and none other. We need systems to urgently curb the growing political polarization of our security services.”

Besides the call to depoliticize Ghana’s security services, Mr. Senyo Hosi is advocating for six other reforms to the 1992 Constitution."I recommend what I term a 7D reform of the Constitution – some of which are covered in various forms in the Constitutional Review Commission report of 2011."