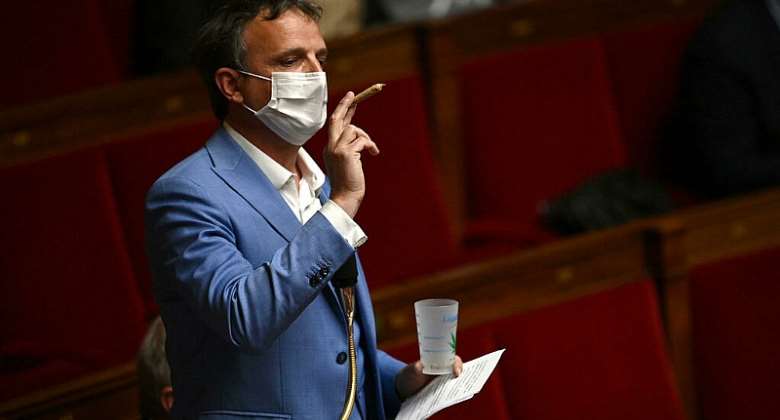 French MPs discussed a bill this week to legalise the consumption of cannabis. Proposed by the hard-left France Unbowed party (LFI), it is not expected to find government support, but several recent polls show public opinion shifting in favour of legalisation.

Caroline Janvier and Jean-Baptiste Moreau from the ruling LREM party were among MPs from five parliamentary groups in support of a bill which would "legalise the production, sale and consumption of cannabis under state control".

A similar proposal put forward by Esther Benbassa from the France Unbowed party back in 2014 had been rejected.

"This law is designed to end the repression associated with managing this drug and replace it with a public health policy for users," the MPs wrote before presenting the bill for debate at the National Assembly on Thursday.

The consider punitive measures alone were not helping to reduce consumption or related risks.

France is Europe's biggest consumer of cannabis, according to a report from the European Monitoring Centre for Drugs and Drug Addiction (EMCDDA), but it remains illegal and heavy fines apply.

A number of recent opinion polls, however, show attitudes towards cannabis use are changing.

In June 2021, 51 percent of French people were in favour of decriminalising cannabis, according to Ifop, the highest number since 1970.

In September 2020, three mayors from the conservative Republicans (LR) party published an opinion piece in agreement with such a step; however they were quickly whipped into line.

Right wing mayor of Reims and pharmacologist Arnaud Robinet says he supports the legalisation of cannabis, mainly as a way of controlling quality in the interest of public health.

He also suggests it would have a positive economic impact on farmers and sellers and of course provide a source of tax revenue for the government.

The rules over cannabis use vary significantly within the EU, according to data gathering site Prohibition Partners.

Malta became the first EU country to legalise the cultivation and personal use of cannabis in 2021, after the United Nations removed the plant from its list of the 'world's most dangerous drugs' in 2020 and recognised its therapeutic uses.

Germany, Switzerland and Luxembourg are expected to follow Malta's example in 2022, and Italy has pledged to hold a referendum on cannabis reform.

The subject is likely to gain ground in the lead up to France's presidential election.

Light at the end of the CBD tunnel?

In a separate development, the Constitutional Council on 7 January handed down a decision stating that CBD or cannabidiol, one of substances in the cannabis plant, did not fall into the category of an addictive drug, nor did it have any harmful effects on health.

The product, known for treating epilepsy and multiple sclerosis, provides a calming effect on people suffering from anxiety and depression.

The announcement effectively overturned a government decree issued on 31 December 2021 in the Journal Official which stated that "the sale of flowers or fibres in all their forms on their own or mixed with other products is banned, as is the possession and consumption".

However, permission was granted for the "growing, import, export, industrial and commercial use of Cannabis sativa L", as long as the hemp plant has only 0.3 percent of THC (Tetrahydrocannabinol, the psychoactive component in the plant) as opposed to 0.2 percent noted in the decree published in July 2021.

European courts in 2020 rejected a ban on the so-called "well-being hemp" in France, stating that it was harmless and could not be considered a drug or a medication. This ruling allowed for CBD products to be put on the market across the EU.

In June 2021, the final appeals court ruled that CBD could be sold in France if it was produced in a European country. But the court did not rule on whether selling CBD in France was legal or not, leaving it in legal limbo.

The Constitutional Council decision in January effectively clears up what was a confusing legal situation for the CBD industry, and hailed as a victory by manufacturers in the hemp production sector.

CBD is estimated to have a potential market value in France of around 700 million euros.